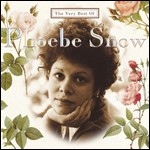 She was born in New York City in 1950,[1] and raised in a musical household in which Delta blues, Broadway show tunes, Dixieland jazz, classical music, and folk music recordings were played around the clock. Her father, Merrill Laub, an exterminator by trade, had an encyclopedic knowledge of American film and theater and was also an avid collector and restorer of antiques. Her mother, Lili Laub, was a dance teacher who had performed with the Martha Graham group.[4]

Snow grew up in Teaneck, New Jersey and graduated from Teaneck High School.[5] She subsequently attended Shimer College in Mount Carroll, Illinois, but did not graduate.[6]

As a student, she carried her prized Martin 000-18 acoustic guitar from club to club in Greenwich Village, playing and singing on amateur nights. Her stage name is a fictional advertising character created in the early 1900s for the Delaware, Lackawanna and Western Railroad: Phoebe Snow was a young woman who appeared dressed all in white. Also, a DL&W passenger train called the Phoebe Snow ran from Hoboken to Buffalo between 1949 and 1960.[7]

Snow was briefly married to Phil Kearns, and on December 10, 1975, she gave birth to a daughter, Valerie Rose, who was born with severe brain damage.[8] Snow resolved not to institutionalize Valerie, and cared for her at home until Valerie died on March 19, 2007, at the age of 31. Snow's efforts to care for Valerie nearly ended her career.[9] She continued to take voice lessons, and she studied opera informally.[9]

Snow was Jewish and Buddhist.[10]

It was at The Bitter End club in 1972 that Denny Cordell, a promotions executive for Shelter Records, was so taken by the singer that he signed her to the label and produced her first recording. She released an eponymous album, Phoebe Snow, in 1974. Featuring guest performances by The Persuasions, Zoot Sims, Teddy Wilson, David Bromberg, and Dave Mason, Snow's album went on to sell over a million copies in the United States and became one of the most acclaimed recordings of the era.

This spawned a Top Five single on the Billboard Hot 100 with "Poetry Man" and was itself a Top Five album in Billboard, for which she received a nomination for the Grammy Award for Best New Artist.[11] The cover of Rolling Stone magazine followed, while she performed as the opening act for tours by Jackson Browne and Paul Simon (with whom she recorded the hit single "Gone at Last" in 1975). 1975 also brought the first of several appearances as a musical guest on Saturday Night Live, on which Snow performed both solo and in duets with Paul Simon and Linda Ronstadt. During the 1975 appearance, she was seven months pregnant with her daughter, Valerie. Her backup vocal is heard on Paul Simon's hit song "50 Ways To Leave Your Lover" along with Valerie Simpson and Patti Austin, from 1975. She also duets with him on the song gospel-tinged "Gone At Last". Both songs appear on Simon's Grammy-winning 1975 album "Still Crazy After All These Years".

Legal battles took place between Snow and Shelter Records. Snow ended up signed to Columbia Records. Her second album, Second Childhood, appeared in 1976, produced by Phil Ramone. It was jazzier and more introspective, and was an RIAA Certified Gold Album for Phoebe, with the Gold Album awarded on July 9th, 1976.[12] She moved to a more rock-oriented sound for It Looks Like Snow, released later in 1976 with David Rubinson producing. 1977 saw Never Letting Go, again with Ramone, while 1978's Against the Grain was helmed by Barry Beckett. After that Snow parted ways with Columbia; she would later say that the stress of her parental obligations degraded her ability to make music effectively. In 1979, she toured extensively throughout the U.S. and Canada with noted guitarist Arlen Roth as her lead guitarist and Musical Director. In 1981, Snow, now signed with Mirage Records, released Rock Away, recorded with members of Billy Joel's band; it spun off the Top 50 hit "Games".

The 1983 Rolling Stone Record Guide summed up Snow's career so far by saying: "One of the most gifted voices of her generation, Phoebe Snow can do just about anything stylistically as well as technically The question that's still unanswered is how best to channel such talent." Snow spent long periods away from recording, often singing commercial jingles for AT&T and others in order to support herself and her daughter.[13] Later, in the 1990s, Snow's voice was featured on commercials for Cotton Incorporated and their The Fabric of Our Lives campaign. During the 1980s she also battled her own life-threatening illness. [13]

Snow returned to recording with Something Real in 1989 and gathered a few more hits on the Adult Contemporary charts. Also, Snow composed the Detroit's WDIV-TV Go 4 It! campaign in 1980. She sang Ancient Places, Sacred Lands composed by Steve Horelick on Reading Rainbow's tenth episode The Gift of the Sacred Dog which was based on the book by Paul Goble and narrated by actor Michael Ansara. It was shot in Crow Agency, Montana in 1983.

Snow performed in 1989 on stage at Avery Fisher Hall in New York City as part of Our Common Future, a five-hour live television broadcast originating from several countries.[14]

In 1990, she contributed a cover version of the Delaney & Bonnie song "Get Ourselves Together" to the Elektra compilation Rubáiyát which included Earth Wind & Fire guitarist Dick Smith. In 1992, she toured with Donald Fagen's New York Rock and Soul Revue and was featured on the group's album recorded live at the Beacon Theater in New York City. Throughout the 1990s she made numerous appearances on the Howard Stern radio show. She sang live for specials and birthday shows. In 1997, she sang the Roseanne theme song a cappella during the closing moments of the final episode. [15]

In 1995, Snow participated in The Wizard of Oz in Concert: Dreams Come True at the Lincoln Center in New York City. In addition to Ms. Snow, the Concert featured performances by Jewel, Joel Grey, Roger Daltrey, Jackson Browne amongst others. Snow sang a very distinctive medley of "If I Only had a Brain; a Heart; the Nerve". An album of the concert was released on Compact Disc on Rhino Records as catalog number R2 72405.

In 2003, Snow released her album Natural Wonder on Eagle Records, containing ten original tracks, her first original material in fourteen years. Snow performed at Howard Stern's wedding in 2008, and made a special appearance in the film Noah's Arc: Jumping the Broom as herself. Some of her music was also featured on the soundtrack of the film. Her Live album (2008) featured many of her hits as well as a cover of "Piece of My Heart".

Phoebe Snow suffered a cerebral hemorrhage on January 19, 2010 and slipped into a coma,[16] enduring bouts of blood clots, pneumonia, and congestive heart failure. Snow died on April 26, 2011 at age 60 in Edison, New Jersey.[17]

This article uses material from the article Phoebe Snow from the free encyclopedia Wikipedia and it is licensed under the GNU Free Documentation License.