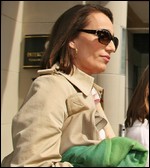 Kristin A. Scott Thomas,[1] OBE (born 24 May 1960) is a British actress who has also acquired French nationality. She gained international recognition in the 1990s for her roles in Bitter Moon; Four Weddings and a Funeral and The English Patient.

Since the 1980s, she has also worked in French cinema in films such as the thriller Tell No One and Philippe Claudel's I've Loved You So Long. She has lived in France since she was nineteen, has brought up her three children in Paris, and says she considers herself more French than English. She has been a member of the Légion d'honneur since 2005.

Scott Thomas was born in Redruth, Cornwall. Her mother, Deborah (née Hurlbatt), was brought up in Hong Kong and Africa, and studied drama before marrying Scott Thomas' father.[2] Her father, Lieutenant Commander Simon Scott Thomas, was a pilot for the Royal Navy Fleet Air Arm who died in a flying accident in 1964.[3][4][5] She is the older sister of actress Serena Scott Thomas, the niece of Admiral Sir Richard Thomas (who was a Black Rod in the House of Lords), and a more distant grand niece of Capt. Robert Falcon Scott, the ill-fated explorer who lost the race to the South Pole.

Scott Thomas' childhood home was in Nether Compton, Dorset, England. Her mother remarried, to another Royal Navy pilot, who also died in a flying accident six years after the death of her father. Scott Thomas was educated at private schools, Cheltenham Ladies' College and St. Antony's Leweston School for Girls, in Sherborne, Dorset and on leaving school, she moved to Hampstead, London, and worked in a department store. She then began training to be a drama teacher at the Central School of Speech and Drama. On being told she would never be a good enough actress, she left at the age of 19 to work as an au pair in Paris.[6] Speaking French fluently, she studied acting at the École nationale supérieure des arts et techniques du théâtre (ENSATT) in Paris, and at age 25 on graduation, was cast opposite pop star Prince as Mary Sharon, a French heiress, in the 1986 film Under The Cherry Moon. On his 2009 3-CD set LOtUSFLOW3R, the album MPLSoUND has a song titled "Better With Time", which Prince has said is an ode to Kristin.

Scott Thomas is perhaps best-known for her central role as an unfaithful wife in The English Patient, one of the biggest screen hits of 1996. During the 1990s, she also appeared opposite Hugh Grant in Bitter Moon and the global box office success Four Weddings and a Funeral. She has also appeared on TV (in the 2003 Book Clubbin' episode of Absolutely Fabulous, she played a character called Plum Berkeley) and in the theatre.

She was awarded an OBE in the 2003 Queen's Birthday Honours list, and was also awarded the Légion d'honneur by the French government in 2005.

Scott Thomas is a frequent subject on the British motoring programme Top Gear. She was used as a standard of reference for "good taste," such as during the "Cool Wall" segment of the programme. Presenter Jeremy Clarkson would rate a car's coolness based mostly on what he thinks Scott Thomas' level of distaste for it would be. She made her long-awaited appearance as the "Star in a Reasonably Priced Car" on the episode broadcast on 25 February 2007. On this episode, amid excessive kowtowing from Clarkson and joking from Richard Hammond and James May because Clarkson has shown much affection for her in the past, she proceeded to rubbish most of the decisions Clarkson had made over the past years of the Cool Wall. She also ridiculed the car that he had just ordered, a Lamborghini Gallardo Spyder. She completed her lap in a time of 1min 54secs, placing her just above Phillip Glenister, although still near the bottom of the leaderboard. It has also been mentioned on Top Gear that Jeremy Clarkson owns a donkey called "Kristin Scott Donkey ", named after Kristin Scott Thomas.

In early 2007, she played Arkadina in a London production of Chekhov's The Seagull, for which she won a Laurence Olivier Award for Best Actress on 9 March 2008.[7] She reprised the role in New York in September 2008.[8]

In 2006, she played the lead role of Hélène, in French, in Ne le dis à personne (Tell No One), by French director Guillaume Canet. In 2008, Scott Thomas received many accolades for her performance in another French film, Il y a longtemps que je t'aime (I've Loved You So Long), including BAFTA and Golden Globe nominations for Best Actress.

In 2008 Scott Thomas took on the little exposed role of Mary, Anne and George's mother Elizabeth Boleyn, Countess of Wiltshire and Ormond in The Other Boleyn Girl movie.

In 2009, she played the role of a fashion magazine creator and editor in the film Confessions of a Shopaholic.

She stars in the film adaption of Douglas Kennedy's novel The Woman in the Fifth, which is planned with an release in late 2010.[9]

In 2011, Scott Thomas will star in the upcoming movie Bel Ami as another love interest of George Duroy (played by Robert Pattinson)[10].

Scott Thomas is divorced from French gynaecologist François Olivennes, with whom she has three children: Hannah (born in 1988), Joseph (1991), and George (2000). They had been together 18 years. She supposedly had a brief romance with Prince while making the 1986 film Under The Cherry Moon.

The separation was reportedly precipitated by her romantic involvement with English actor Tobias Menzies, whom she met while appearing in Chekhov's play Three Sisters in London's West End.[11] Menzies was also her costar in a London production of Pirandello's As You Desire Me in 2006.[12]

Her relationship with Menzies now over, she lives in Paris with her two younger children, and counts Charlotte Rampling, Gérard Depardieu, Jane Birkin,[6] and her English Patient costars Juliette Binoche and Ralph Fiennes[11] among her closest friends.

This article uses material from the article Kristin Scott Thomas from the free encyclopedia Wikipedia and it is licensed under the GNU Free Documentation License.

Carl Philipp Emanuel Bach 1. Satz aus dem Flötenkonzert G-Dur
Update Required To play the media you will need to either update your browser to a recent version or update your Flash plugin.