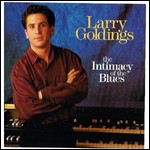 Larry Goldings (born 1968) is an American pianist, organist, and composer.

Goldings was born in Boston, Massachusetts. His father was a classical music enthusiast, and Larry studied classical piano until the age of twelve. While in high school at Concord Academy, he attended a program at the Eastman School of Music. During this period Erroll Garner, Oscar Peterson, Dave McKenna, Red Garland, and Bill Evans were prime influences. As a young teenager, Goldings studied privately with Ran Blake and Keith Jarrett.

Goldings moved to New York in 1986 to attend a newly formed jazz program under the leadership of Arnie Lawrence at The New School. During college he studied piano with Jaki Byard and Fred Hersch. While still a freshman, Roland Hanna invited Goldings to accompany him to a three-day private jazz party in Copenhagen. While there, Goldings met jazz legends Sarah Vaughan, Kenny Burrell, Tommy Flanagan, and Hank Jones; and he also played piano in a band with Vaughan, Harry "Sweets" Edison, and Al Cohn. While still a college student, he embarked on a worldwide tour with Jon Hendricks and worked with him for a year. A collaboration lasting almost three years with jazz guitarist Jim Hall followed.[1]

In 1988, Goldings began his development as an organist during a regular gig at a pianoless bar called Augie's Jazz Bar (now Smoke) on New York's Upper West Side. He was featured with several bands, and his own trio with guitarist Peter Bernstein and drummer Bill Stewart got its start there. His first release was Intimacy of the Blues in 1991.

In 2007, Larry Goldings, Jack DeJohnette and John Scofield, received a Grammy Award nomination in the category of Best Jazz Instrumental Album Individual or Group for their live album, Trio Beyond - Saudades (ECM).

In 2012 and 2013, Goldings was selected to participate in both the Sundance Institute Documentary Film and Sundance Feature Film Composer Fellowship Programs. At the Documentary Film Lab in Sundance, Utah, Goldings scored scenes from filmmaker Johanna Hamilton's "1971." Goldings continued with Sundance Institute in 2013, at the feature film lab held for the first time in Skywalker Ranch, Marin County. There, he collaborated with filmmaker Pamela Romanowsky, scoring scenes from her film The Adderall Diaries. Goldings' Advisors in that program included noted film composers Mark Isham, Heitor Pereira, Harry Gregson-Williams, and Thomas Newman.

In 2016, John Mayer asked Goldings to be a part of “The Search for Everything,” John Mayer's first tour in three years. Goldings has been in the studio recording with John Mayer and band, and is gearing up for a worldwide tour to include the United States, Europe, and South America in 2017.

Goldings' melodic style of organ playing has often been compared to that of Larry Young. On organ, Goldings cites as his first inspirations the solo piano style of Dave McKenna "who walks his own bass lines better than anyone" and Billy Preston accompanying Aretha Franklin on "Bridge Over Troubled Water". Other musical influences cited by Goldings include the Wes Montgomery records featuring Mel Rhyne and Jimmy Smith; Shirley Scott; Chester Thompson; Joe Zawinul; and Jack McDuff.

On piano, Goldings improvisational skills, command of the harmonic language, and melodic writing are well known especially among his jazz peers. His inspirations range from Maurice Ravel and Sergei Prokofiev to Teddy Wilson and Randy Newman. He is known for his ability to craft timeless, memorable melodies, in the moment of performance.

In 2013, Goldings was asked by filmmaker Jeff Garlin to compose music with "a Nino Rota feeling" for the film Dealing with Idiots. Goldings composed, performed, and produced the soundtrack. The score features the song "Calm Me Down" during the end credits. The song was performed by Goldings, Steve Nistor, and Mike Viola.

Goldings' songs and arrangements appear in the films Funny People, How to Lose Friends and Alienate People, Neighbors, The Founder, Proof, Space Cowboys, Trainwreck, and in the TV show Masters of Sex. He is a featured performer in The Dream's on Me (2009), a documentary directed by Clint Eastwood, and appeared in Bernard and Doris and 20 Feet from Stardom. His song "Daydream by Design" can be heard in TV commercials.

This article uses material from the article Larry Goldings from the free encyclopedia Wikipedia and it is licensed under the GNU Free Documentation License.

Joseph Haydn 1. Satz aus dem Klaviertrio As-Dur
Update Required To play the media you will need to either update your browser to a recent version or update your Flash plugin.