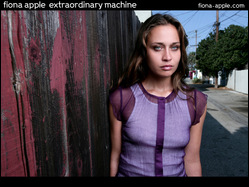 Fiona Apple McAfee Maggart (born September 13, 1977) is an American singer-songwriter and pianist. Her debut album, Tidal, was released in 1996 and received a Grammy Award for Best Female Rock Vocal Performance (with an additional six nominations) for the single "Criminal". Subsequent albums include: When the Pawn... (1999), Extraordinary Machine (2005), and The Idler Wheel... (2012).

Born in New York, Apple is the daughter of singer Diane McAfee and actor Brandon Maggart.[6] Her maternal grandparents were dancer Millicent Green and big band vocalist Johnny McAfee. Her sister sings cabaret under the stage name Maude Maggart, and actor Garett Maggart is her half brother.

At age 12 she was raped outside her apartment.[7] She then developed an eating disorder, purposely slimming her developing body, which she saw as "bait".[8]

Apple was introduced to the music industry in 1994, when she gave a demo tape containing the songs "Never Is a Promise", "Not One of Those Times", and "He Takes a Taxi" to her friend who was the babysitter of music publicist Kathryn Schenker.[9] Schenker then passed the tape along to Sony Music executive Andy Slater.[10] Apple's abilities captured his attention, and Slater signed her to a record deal.[1][2]

In 1996, Apple's debut album, Tidal, was released by Work Records and Columbia Records. The album sold 2.7 million copies and was certified three times platinum in the U.S.[11][12] "Criminal", the third single, became a hit and the song reached the top forty on the U.S. Billboard Hot 100. The song's controversial Mark Romanek-directed music video played on MTV.[13] Other singles from Tidal included "Shadowboxer", "Sleep to Dream", and "Never Is a Promise". Apple accepted MTV Video Music Award for "Best New Artist" for her song Sleep to Dream in 1997[14] The New Yorker and NYRock criticized her MTV award show speech.[1][9] When I have something to say, I'll say it," she said, responding to these criticisms in an article in Rolling Stone in January 1998.[15]

During this period, Apple also made recordings of The Beatles' "Across the Universe" and Percy Mayfield's "Please Send Me Someone to Love" for the soundtrack of the film Pleasantville. She later canceled the last twenty-one dates on a tour in support of her album due to "personal family problems".[16]

Apple's second album, When the Pawn..., was released in 1999. Its full title is a poem Apple wrote after reading letters that appeared in Spin regarding an article that had cast her in a negative light in an earlier issue.[17] The title's length earned it a spot in the Guinness Book of Records for 2001. However, as of October 2007, it no longer has the longest album title, as Soulwax released Most of the Remixes, a remix album whose title surpasses When the Pawns length by 100 characters.[18] When the Pawn was cultivated during Apple's relationship with film director Paul Thomas Anderson. When the Pawn, which was produced by Jon Brion, used more expressive lyrics, experimented more with drum loops, and incorporated both the Chamberlin and drummer Matt Chamberlain.[19] The album received a positive reception from publications such as The New York Times and Rolling Stone. It did not fare as well commercially as her debut, though it was an RIAA-certified platinum album[11] and sold one million copies in the U.S.[12] The album's lead single, "Fast as You Can", reached the top twenty on Billboard's Modern Rock Tracks chart and became Apple's first Top 40 hit in the UK. The videos for two follow-up singles, "Paper Bag" and "Limp" (directed by then-boyfriend Anderson), received very little play.

After performing for forty minutes in a set hampered by equipment issues to 3,000 audience members at the New York City Roseland Ballroom, a frustrated Apple left the stage without returning. Her performance saw Apple appearing distraught at the sound quality, apologizing numerous times for the sound and crying.[20] The incident was described by AOL as "music's most infamous on-stage meltdown".[21] After completing a concert tour in support of her second album in 2000, Apple relocated to Los Angeles. During her hiatus, Apple contemplated retiring from her recording career. Apple sang with Johnny Cash on a cover of Simon & Garfunkel's "Bridge over Troubled Water" that ended up on his album American IV: The Man Comes Around and was nominated for a Grammy Award for "Best Country Collaboration with Vocals". She also collaborated with Cash on Cat Stevens's "Father and Son", which was included in his 2003 collection Unearthed.

Apple's third album, Extraordinary Machine, was originally produced by Jon Brion. In spring 2002, Apple and Jon Brion, her longtime friend and producer on When the Pawn, met for their weekly lunch meeting. Brion reportedly "begged" Apple to make another album. Apple agreed, and Brion went to Apple's label, Epic Records, with strict stipulations (including no deadline), which the label eventually agreed to. Recording sessions began in 2002, at Ocean Way studios in Nashville, Tennessee, but later moved to the Paramour Mansion in Los Angeles. Work on the album continued until 2003, and in May of that year it was submitted to Sony executives. In 2004 and 2005, tracks were leaked on the Internet in MP3 format and played on U.S. and international radio. Subsequently, MP3s of the entire album went online. Although a Web site distributing the album was quickly shutdown, it soon reached P2P networks and was downloaded by fans.[22][23] A fan-led campaign supported the album's official release.

Mike Elizondo, who had previously played bass on Pawn, was brought back as co-producer to complete the tracks he had begun with Brion and Apple. Spin later reported the following: "Fans erroneously thought that Apple's record label, Epic, had rejected the first version of Extraordinary Machine... in reality, according to Elizondo, Apple was unhappy with the results, and it was her decision to redo the record, not her label's."[24] In August 2005, the album was given an October release date.[23] Production had been largely redone "from scratch" by Elizondo and was co-produced by Brian Kehew. Two of the eleven previous leaked tracks were relatively unchanged, and one new song was also included.[25] Despite suggestions that the album had caused a rift between Brion and Apple, they regularly perform together at Largo, a club in Los Angeles, including a joint appearance with Elizondo on bass just before the news broke of an official release.[26] Extraordinary Machine debuted at number seven and was nominated for a Grammy Award for "Best Pop Vocal Album". It was eventually certified gold[11] and sold 600,000 copies in the U.S., though its singles ("Parting Gift", "O' Sailor", "Not About Love" and "Get Him Back") failed to enter any Billboard charts.[27] Apple went on a live tour to promote the album in late 2005.

In June 2006, Apple appeared on the joke track "Come Over and Get It (Up in 'Dem Guts)" by comedian Zach Galifianakis. Galifianakis previously appeared in the music video for Apple's "Not About Love".[28] Apple recorded a cover of "Sally's Song" for the 2006 special edition release of the soundtrack for the Tim Burton film The Nightmare Before Christmas. In May 2006, Apple paid tribute to Elvis Costello on VH1's concert series Decades Rock Live, by performing Costello's hit "I Want You". Her version was subsequently released as a digital single.[29] Apple toured the East Coast during August 2007, with Nickel Creek.[30][31] In 2008, Apple recorded a duet titled "Still I" with Christophe Deluy. In 2009, Apple covered "Why Try to Change Me Now" and "I Walk A Little Faster" for The Best Is Yet to Come - The Songs of Cy Coleman. In January 2010, Fiona Apple and Jon Brion performed together at "Love and Haiti, Too: A Music Benefit", a charity concert for the people hurt by the Haiti earthquake. Fiona sang a cover of "(S)he's Funny That Way", composed by Neil Moret, lyrics by Richard Whiting, which is often associated with the singer Billie Holiday. In June 2010, Fiona released a song titled "So Sleepy", produced by Jon Brion and written by children involved with the non-profit organization 826LA. The song was included on a compilation album released by the organization titled Chickens in Love. Apple collaborated with Margaret Cho on her album Cho Dependent, which was released on August 24, 2010.[32]

In late 2010, Billboard published an article stating that Apple was planning on releasing a new album in spring 2011, with musician Michelle Branch claiming to have heard some of the new tracks.[33] Drummer Charley Drayton also told Modern Drummer magazine that he was co-producing the record.[34] However, the album was not released in the spring and Billboard reported later that Epic was not aware of a record.[35] Apple delayed the album's release until 2012, explaining that she was waiting "until her label found a new president and that she didnt want her work to be mishandled amid corporate disarray."[36] In January 2012, after its new record label head, LA Reid hinted at new music from Apple, Epic Records announced that the album would be released later in the year.[37] Apple announced performances at the South by Southwest Festival and a spring 2012 tour soon after.[38] The Idler Wheel Is Wiser Than the Driver of the Screw and Whipping Cords Will Serve You More Than Ropes Will Ever Do,[39][40] Apple's fourth studio album, was released on June 19, 2012, in the United States.[41] According to an article in American Songwriter "The Idler Wheel isn't always pretty, but it pulses with life, brutal and true."[42] Apple contributed a previously unreleased song entitled "Dull Tool" to the soundtrack of the 2012 Judd Apatow film This Is 40.[43] Another song recorded for the film that wasn't included in the soundtrack has yet to be released.[44] In September 2013, a Chipotle ad appeared online with a soundtrack of Apple covering "Pure Imagination" from the 1971 film Willy Wonka and the Chocolate Factory. The video, which follows a scarecrow as he discovers the truth about factory farming and processed food, was described as "haunted," "dystopian," "bizarre," and "beautiful."[45][46]

In the mid-1990s Apple dated magician David Blaine,[47] and was romantically linked to director Paul Thomas Anderson,[48] who directed several music videos for her second album.[49] She dated writer and actor Jonathan Ames from 2007 until they parted ways at the end of 2010.[50][51][52]

In a June 2012 interview, it was revealed that Apple had briefly married a French photographer several years ago, "for complicated reasons."[53]

Apple appeared on Marc Marons WTF podcast in July 2012 and discussed the changes in her life and career over the past 15-plus years".[54]

On September 19, 2012 Apple was arrested[55] at an internal Border Patrol checkpoint in Sierra Blanca, Texas and charged with possession of hashish.[56] Authorities detained Apple at the Hudspeth County Jail.

In November 2012, Apple wrote a letter to her fans a scan of which was posted to her website and her Facebook page postponing the South American leg of her tour due to the ill-health of her pet dog, Janet. According to the letter, the dog has Addison's disease, and further has had a tumor "idling in her chest" for two years.[57]

This article uses material from the article Fiona Apple from the free encyclopedia Wikipedia and it is licensed under the GNU Free Documentation License.