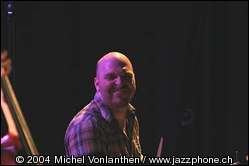 David King (born 8 June 1970) is a drummer/ composer from Minneapolis. He is best known for being a founding member of the jazz groups The Bad Plus (with Reid Anderson and Ethan Iverson) and Happy Apple (with Michael Lewis and Erik Fratzke) although he is active in many other projects including free jazz collective Buffalo Collision with NYC "Downtown" musicians Tim Berne and Hank Roberts and the electronic art/pop group Halloween Alaska as well as the noise/prog band The Gang Font with former Husker Du bassist Greg Norton.

In 2010 King released a solo record titled "Indelicate" on the Sunnyside label where the drummer plays duets with himself on piano aided by overdubbing in the studio.

King has also written and performed for modern dance with the Mark Morris Dance Group and for fashion, composing and performing live for three seasons of designer Isaac Mizrahi's fashion week shows at Bryant Park NYC and for film with the award winning animated shorts "Bike Ride Story" and "Bike Race" by Tom Schroeder. In March 2008 King appeared with The Bad Plus on the Late Night with Conan O'Brien television show playing one of King's compositions, "Thriftstore Jewelry".

King also features in the documentary 'King for Two Days' which documents a two-night concert held at the Walker Art Center in Minneapolis, MN celebrating the music of Dave King and featuring performances by five of the bands he drums in. King for Two Days is an official selection for the 2012 Big Sky Documentary Film Festival.

This article uses material from the article David King (musician) from the free encyclopedia Wikipedia and it is licensed under the GNU Free Documentation License.