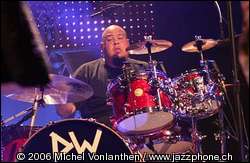 Abraham "Abe" Laboriel, Jr. (born March 23, 1971) is an American session drummer. He is the son of Mexican bass guitarist Abraham Laboriel, Sr. and brother of record producer, songwriter, and film composer Mateo Laboriel. He has been the drummer for famed rock musician Paul McCartney as well as the French singer Mylène Farmer, among others.

Laboriel was mentored by well-known percussionists and drummers, including Jeff Porcaro, Chester Thompson, Bill Maxwell and Alex Acuña, who had formed the band Koinonia with his father in the 1980s.

He attended the Dick Grove School of Music, studying with Peter Donald, during his junior year in high school. He also attended the Hamilton High School Academy of Music with Manny Marroquin, and is responsible for Marroquin changing his career from drumming to mixing.[2] in Los Angeles in his senior year. In 1989, he was honored by the National Foundation For The Advancement Of The Arts and Down Beat magazine. He then enrolled at the Berklee College of Music, where he graduated in 1993.

Laboriel's first break as a drummer was a tour with guitarist Steve Vai. He then toured with Seal, with whom he was seen by many record producers around Los Angeles, California which led to session work. Laboriel next toured with k.d. lang for a while, where Sting saw him play with her, leading Laboriel to join Sting's touring band. The k.d. lang connection also led Laboriel to working with Paul McCartney, including McCartney's appearance during the halftime of Super Bowl XXXIX. He also toured and recorded on studio with former Menudo member, Robi Draco Rosa on his album Vagabundo.

Laboriel was part of a power trio by the name of The Raging Honkies. He is part of the collective that is Chocolate Genius, Inc.

In 2006, in the show "Avant que l'ombre... à Bercy" (in English, "Before the shadow... at Bercy"), Laboriel sang "Les Mots" (in English, "the words") in duet with Mylène Farmer. He also played with Sting at the Montreux Jazz Festival that year.

Laboriel toured with Eric Clapton and Steve Winwood on their 14-date American Tour in 2009 following their Japanese tour the year before.[4]

He made his live debut with Paul McCartney at The Concert for New York City in 2001 and has played on every McCartney tour since then.[5]

This article uses material from the article Abe Laboriel, Jr. from the free encyclopedia Wikipedia and it is licensed under the GNU Free Documentation License.