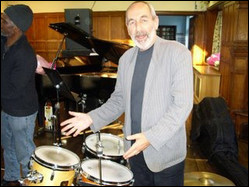 Trevor Ramsey Tomkins (born 12 May 1941 in London) is an English jazz drummer best known for his work in a number of British bands in the 1970s, including Gilgamesh.

His recorded several albums with pianist Michael Garrick and Don Rendell in the late 1960s and early 1970s. In the 1970s, he worked with Ian Carr's Nucleus, Giles Farnaby's Dream Band and Henry Lowther's Quaternity. He appears on the 1971 album First Wind by Frank Ricotti and Mike de Albuquerque.

He is the first cousin of Roy Budd (jazz pianist and film composer of "Get Carter" fame), and Peter C. Budd (jazz guitarist living in Chicago), and was a member of various trios and other line-ups with Roy Budd.

This article uses material from the article Trevor Tomkins from the free encyclopedia Wikipedia and it is licensed under the GNU Free Documentation License.