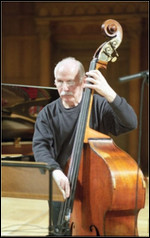 He worked with Tubby Hayes and Ronnie Scott in their group 'The Jazz Couriers' for a year from 1958 and was part of the group of musicians who opened Ronnie Scott's Club in November 1959.[1] He was a regular member of Hayes' groups from 1961.

This article uses material from the article Jeff Clyne from the free encyclopedia Wikipedia and it is licensed under the GNU Free Documentation License.