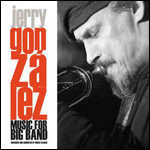 Jerry Gonzalez (b. New York, June 5, 1949) is an American-born Latino jazz trumpeter and percussionist, most noteworthy for his contributions to Latin jazz.

Jerry Gonzalez was born in 1949 in Manhattan, on 158 street and 3ª Avenue, and moved to the Bronx at the age of 4. He was raised in a strong musical atmosphere, with the strains of Latin, Afro-Cuban and jazz music always in his ear, establishing his musical appreciation and molding his future work as an artist. His father, Jerry Gonzalez Sr. was a master of ceremonies and lead singer for bands during the Palladium era and sang with musicians like Claudio Ferrer. In junior high school he began playing trumpet and congas and jamming with local bands. After deciding this was his calling, Gonzalez completed his formal studies at New York College of Music and New York University. He started his professional career playing with Lewellyn Mathews in New York State World's Fair in 1963. Then, in 1970, he started playing congas with Dizzy Gillespie. With Gillespie's support and encouragement, Gonzalez was able to fuse the African based rhythms onto jazz elements without compromising the essence of either. The next year, Gonzalez joined Eddie Palmieri's band till 1974, before moving on to work with "Conjunto Libre" the band led by great timbales artist Manny Oquendo and Jerry's brother, bassist Andy Gonzalez. He and his brother Andy were the founders of the Conjunto Anabacoa and later of the charismatic Grupo Folklórico y Experimental Nuevayorquino with whom he made two records: Concepts of Unity (1974), and Lo Dice Todo (1975). The band members were: Jerry and Andy Gonzalez, Frankie Rodríguez, Milton Cardona, Gene Golden, Carlos Mestre, Nelson González, Manny Oquendo, Oscar Hernandez, José Rodríguez, Gonzalo Fernández, Alfredo "Chocolate" Armenteros, Willy García, Heny Álvarez, Virgilio Martí, Marcelino Guerra, Rubén Blades, Orlando "Puntilla" Rios and Julito Collazo.

Inevitably, Gonzalez talent led him to form his own band. In 1979, Gonzalez published his first album as a leader: Ya yo me curé. Soon he formed his best-known band: Jerry Gonzalez and the Fort Apache Band which included his brother Andy and Kenny Kirkland, Sonny Fortune, Nicky Marrero, Milton Cardona, Papo Vazquez and the late Jorge Dalto. The ensembles' first two albums were recorded live at European jazz festivals, The River is Deep in 1982 in Berlin and Obatalá in 1988 in Zurich. These were followed by their hit album, Rumba Para Monk, in 1988, earning them recognition from the French Academie du Jazz with the Jazz Record of the Year award. This was the record that caught the ears of the jazz community, and is still considered a stellar project. After that, the 15 member band was compressed into a sextet: Larry Willis (piano), Andy Gonzalez (bass), Steve Berrios (Drums) and Carter Jefferson (sax) and Joe Ford (sax).

Gonzalez and the band subsequently released Earthdance (Sunnyside,1990) and Moliendo Café (Sunnyside, 1991). These albums again demonstrated the band's ability to play Latin inspired jazz with genuine sensitivity and virtuosity. After Moliendo Café, Carter Jefferson died and was replaced by John Stubblefield. They then released Crossroads in 1994 and Pensativo in 1995, each of which earned them Grammy nominations. The ensemble was awarded The Beyond Group of the Year by both Down Beat Magazine reader's and critic's polls in 1995 and 1996.

Gonzalez and group continued their creations on the 1996 album Fire Dance, recorded live at Blues Alley, and featuring interpretations of Thelonious Monk songs Let's Call This and Ugly Beauty, as well as original compositions. Their efforts were celebrated by winning a score of awards, including Best Jazz Group in Playboy Magazines Readers Poll for 1997. In 1998 they swept the Latin Jazz category at the New York Jazz Awards, winning both the Industry and Journalist Polls. In 1999 the group scored big with the critics and readers polls for Beyond Group of The Year in Down Beat Magazine.

Jerry Gonzalez & the Fort Apache Band offered a tribute to Art Blakey and the Jazz Messengers on their 2005 release Rumba Buhaina. That was their first record as a quintet, without John Stubblefield, who died in 2005. The band is still alive and functioning.

His years in Spain

Gonzalez popularity rose after his contribution to the movie Calle 54, directed by the Oscar awarded Fernando Trueba, where the main names of Latin jazz participated: Tito Puente, Paquito DRivera, Gato Barbieri, Chucho Valdés, Dave Valentin, and Israel "Cachao" López. This was not the only collaboration of Gonzalez in movies, as he participated in Crossover Dreams (León Ichaso, 1985) with Rubén Blades and Virgilio Martí, Piñero (León Ichaso, 2001), and episodes of Sesame Street. After the premiere of Calle 54 in 2000, Gonzalez relocated to Madrid. The trumpeter went there for just one day during the tour with Calle 54 and ended up living there. He immersed himself in the flamenco scene and started to develop a new concept with the genre that would blossom in the future.

His hiatus in Madrid resulted in the production of Los Piratas Del Flamenco (2004) a band and album that included the flamenco guitarist Niño Josele, the percussionist Israel Suárez "Piraña" and the singer Diego El Cigala. A novel approach is evident, as it was done without bass, without drums or piano, a radically new sound, a fusion of jazz and flamenco but with a twist. The album was nominated to the Grammy Awards as best Latin jazz album and won the Critics Award in New York as best Latin-jazz album of the year. He has also played with other flamenco musicians such as Enrique Morente, Paco de Lucía, Javier Limón and Jorge Pardo, copla musicians like Martirio and pop musicians living in Spain like the Argentinean Andrés Calamaro. Gonzalez latest albums have been A primera vista (duet with Federico Lechner, 2002), Music for Big Band (Youkali/Universal, 2006) and Avísale a mi contrario que aquí estoy yo (Cigala Music, 2010), recorded with El comando de la clave, Jerry's quartet in Spain, which includes the Cubans Alain Pérez (bass), Javier Massó "Caramelo" (piano) and Kiki Ferrer (drums). It was nominated as best Jazz album to the Spanish Music Awards. The American edition of this album was called Jerry Gonzalez y el Comando de la Clave (Sunnyside, 2011) was nominated to the Latin Grammy Awards as Best Latin Jazz Album and was voted Best Latin Jazz Album of the Year 2011 by jazz critics Ted Panken (Down Beat magazine) and Doug Ramsey.

His next releases are an album with the Spanish contrabass player Javier Colina, a duet album with the flamenco guitarist Niño Josele and a Fort Apache album recorded live at the Blue Note in 2012 for the label Half Note Records.

This article uses material from the article Jerry Gonzalez from the free encyclopedia Wikipedia and it is licensed under the GNU Free Documentation License.