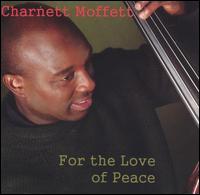 Charnett Moffett (born June 10, 1967) is an American jazz musician[1] and composer known as an innovator and virtuoso who plays piccolo bass, double bass, and bass guitar.[2] He currently leads his band Nettwork.

Charnett Moffett attended Fiorello H. LaGuardia High School of Music & Art and Performing Arts in New York City and later studied at Mannes College of Music and the Juilliard School of Music. In 1983, he played on saxophonist Branford Marsalis' debut as a leader, Scenes in the City, and the following year he joined trumpeter Wynton Marsalis’ quintet, appearing on 1985's acclaimed Black Codes (From the Underground). During the 1980s, Moffett also worked with Stanley Jordan, appearing on the innovative guitarist's best-selling 1985 Blue Note debut, Magic Touch, as well as two Blue Note albums with drummer Tony Williams’ quintet: 1987's Civilization and 1988's Angel Street. In 1987, Moffett signed with Blue Note Records and debuted as a leader that year with his first of three albums for Blue Note, Beauty Within, which featured his father Charles Moffett on drums, older brothers Codaryl Moffett on drums and Mondre Moffett on trumpet, Kenny Garrett on alto saxophone, and Stanley Jordan on guitar.

In 2008 Moffett signed with Motéma Music releasing The Art of Improvisation in May 2009 and Treasure in June 2010. The Art of Improvisation was his Motéma debut (and his eighth recording as a leader), overdubbing electric bass guitar, piccolo bass and acoustic upright bass. Joined by drummers Will Calhoun and Eric McPherson and Tibetan vocalist Yungchen Lhamo, the release references Asian and Middle Eastern influences.

Treasure (2010), while sharing some of the Asian and Middle Eastern influences of The Art of Improvisation, has an emphasis on the swing and pulse for which Moffett has become known. The release, while his second on Motéma, marked his eleventh as a leader. Once again on Treasure, he uses his three-pointed bass method to express his distinct musicality: his upright acoustic bass, his fretless electric bass and his electric piccolo bass. The Making of Treasure, a documentary directed and narrated by Moffett, is included as enhanced content on the CD. Treasure was also released by King Records in Japan and by Membran International in the EU.

Moffett worked with Jana Herzen on her sophomore release Passion of A Lonely Heart (October 2012), playing the upright bass and electric bass.

In 2013 he released The Bridge: Solo Bass Works and Spirit of Sound, also on Motéma Music.

This article uses material from the article Charnett Moffett from the free encyclopedia Wikipedia and it is licensed under the GNU Free Documentation License.