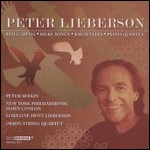 Lieberson studied composition with Milton Babbitt, Charles Wuorinen, Donald Martino, and Martin Boykan. After completing his musical studies at Columbia University, he left New York in 1976 for Boulder, Colorado, to continue his studies with Chögyam Trungpa, a Tibetan Vajrayana Buddhist master. It was there he met and married Ellen Kearney, a fellow student of Trungpa's. At their teacher's request, the Liebersons moved from Boulder to Boston, Massachusetts, to co-direct Shambhala Training, a meditation and cultural program.

Lieberson attended Brandeis University, from which he received a Ph.D. From 1984 to 1988 he taught at Harvard University. He then became international director of Shambhala Training in Halifax, Nova Scotia.

Beginning in 1994, Lieberson devoted his time entirely to composition. He met his second wife, mezzo-soprano Lorraine Hunt Lieberson, in 1997 during the Santa Fe Opera production of his work Ashoka's Dream; they married in 1999 after Lieberson and his first wife were divorced. He wrote his song cycles Rilke Songs and Neruda Songs for Hunt Lieberson. The Neruda Songs were co-commissioned by the Los Angeles Philharmonic and the Boston Symphony; the world premiere was given on May 20, 2005, by the Los Angeles Philharmonic with Esa-Pekka Salonen conducting and Hunt Lieberson as soloist.[1] The Boston Symphony performed the work in November 2005 with Hunt Lieberson as soloist and James Levine conducting, followed by performances with the Cleveland Orchestra, Robert Spano conducting. Hunt Lieberson died of breast cancer in July 2006, aged 52.[2] Nonesuch subsequently released a commercial recording of the Boston/Levine performance of the Neruda Songs.[3]

In December 2007, Lieberson won the 2008 University of Louisville Grawemeyer Award for Music Composition for Neruda Songs.[4] The Rilke Songs have also been issued, in separate studio and concert performances by Hunt Lieberson, both on the Bridge Records, Inc. label.[5]

Lieberson was commissioned by the Boston Symphony to compose another cycle of Neruda songs, which became the Songs of Love and Sorrow. When he returned to the work, it was no longer simply a memorial to Hunt Lieberson and personal farewell, but also reflected the influence of his daughters and his third wife, Rinchen Lhamo.[6]

Lieberson had three daughters from his first marriage. Shortly after Lorraine Hunt Lieberson died, Lieberson himself was diagnosed with lymphoma. Though thought to have achieved full remission,[4] he died of complications of the disease.[7] He was living in Santa Fe, New Mexico at the time of his death.

This article uses material from the article Peter Lieberson from the free encyclopedia Wikipedia and it is licensed under the GNU Free Documentation License.