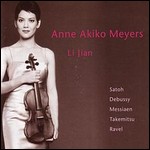 Anne Akiko Meyers (born May 15, 1970) is an American concert violinist. Meyers has toured and collaborated with a number of symphony orchestras, Il Divo, Chris Botti, and Wynton Marsalis. Meyers was featured on MSNBC's Countdown with Keith Olbermann on October 26, 2010.[1]

Meyers was born in San Diego, California, the daughter of an artist and college president. Her mother is of Japanese descent.[2] Raised in Southern California, she studied with Shirley Helmick, and then went on to study with Alice and Eleonore Schoenfeld at the Colburn School of Performing Arts in Los Angeles, California. She then proceeded to study with Josef Gingold at Indiana University and Dorothy DeLay, Felix Galimir and Masao Kawasaki at the Juilliard School in New York City. Combining her junior and senior high school years and graduating early from the Juilliard School at the age of 20, she was touring the world and recorded exclusively for RCA Red Seal.[3]

Meyers performed with the Los Angeles Philharmonic and, at the age of twelve, debuted with the New York Philharmonic with Zubin Mehta conducting. When she was sixteen, she signed with ICM Artists and began touring and recording. At the age of eighteen, she recorded her first album in London at the Abbey Road Studios, featuring the Barber and Bruch Concertos with the Royal Philharmonic Orchestra. Having signed an exclusive RCA Red Seal contract at the age of 21, she went on to record a comprehensive discography. At the age of 23, she was the sole recipient of the Avery Fisher Career Grant.[4]

Meyers tours with a 1730 Stradivarius violin she owns called the "Royal Spanish", a 1697 Stradivarius called "Molitor", and has lifetime use, for touring and performances, of the 1741 Vieuxtemps Guarneri del Gesu.[5] The "Molitor", which was once purported to have been owned by Napoleon Bonaparte but provenance was established to show the ownership was actually one of Napoleon's Generals, Count Gabriel Jean Joseph Molitor,[6] was purchased from Tarisio Auctions on October 14, 2010 for US$3,600,000, at the time the highest recorded auction price for any musical instrument[7][8] until the Lady Blunt Strad was sold on June 20, 2011. She has used the Molitor in multiple studio recordings including a recording of Bach's Concerto in D minor for Two Violins, BWV 1043 in which, through the magic of modern studio art, she plays both violin parts, one part on the "Royal Spanish" Strad and the other on the ex-Molitor.[9] On 24 January 2013 the 1741 Vieuxtemps Guarneri del Gesu was purchased by an anonymous buyer for an undisclosed but, reportedly, record amount, and it was announced that Meyers would receive lifetime use of the violin.[10] The purchase price of the violin exceeded $16m (£10.5m).[11]

Meyers asked the jazz musician Wynton Marsalis to write cadenzas for her in Mozart's Violin Concerto in G Major, No.3 which she premiered with the Utah Symphony Orchestra.[12]

Meyers has recorded music on numerous labels. Her debut disc, recorded at the age of 18, included the Violin Concerto (Barber) and the Violin Concerto No. 1 (Bruch) with Christopher Seaman and the Royal Philharmonic Concert Orchestra. RPO Records recorded the sonatas of Saint-Saëns and Fauré. Her RCA catalogue includes Lalo's Symphonie Espagnole and Bruch's Scottish Fantasy with Jesús López-Cobos and the Royal Philharmonic; the Franck and Strauss Sonatas; the Violin Concerto (Mendelssohn) and a selection of other works with Andrew Litton and the Philharmonia Orchestra; and Prokofiev Violin Concertos with the Frankfurt Radio Symphony under Dmitri Kitajenko. Sonata albums include "Salut d'Amour" featuring many encore pieces with classic Japanese folksongs and one featuring works by Copland, Ives, Piston, and David Baker with pianist Andre-Michel Schub.

Meyers commissioned Mason Bates to write his first violin concerto. She made the world premiere with Leonard Slatkin and the Pittsburgh Symphony Orchestra in December 2012.[19]

Meyers was a panelist, recitalist and teacher at the Juilliard School's Starling-DeLay Symposium in 2006 and in May, 2008 was invited by UCLA as Regent's Lecturer in violin.[20]

In late 2009, Meyers joined the Butler School of Music at University of Texas at Austin as Distinguished Artist and Professor of Violin.[21]

This article uses material from the article Anne Akiko Meyers from the free encyclopedia Wikipedia and it is licensed under the GNU Free Documentation License.

Johann Christoph Friedrich Bach Variationen über "Ah, vous dirai-je Maman"
Update Required To play the media you will need to either update your browser to a recent version or update your Flash plugin.