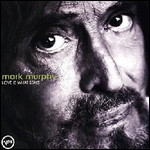 Mark Murphy (born March 14, 1932) is an American jazz singer based in New York. He is most noted for his definitive and unique vocalese and vocal improvisations with both melody and lyrics. He is the recipient of the 1996, 1997, 2000, and 2001 Down Beat magazine readers jazz poll for Best Male Vocalist of the Year and is also the recipient of six Grammy award nominations for Best Vocal Jazz Performance. He is also famous for his original lyrics to the jazz classics "Stolen Moments" and "Red Clay". From his Meet Mark Murphy (1956) to the current A Beautiful Friendship: Remembering Shirley Horn (2013), Murphy continues attracting audiences and admirers up to the present day.

Born in Syracuse, New York, in 1932, Murphy was raised in a musical family,[1] his parents having met as members of the local Methodist Church choir. He grew up in the nearby small town of Fulton, New York,[2] where his grandmother and then his aunt were the church organists. Opera was also popular in the Murphy home. He started piano lessons at the age of seven.

Murphy graduated from Syracuse University in 1953, majoring in Music and Drama. University life included performing on campus and also in a club piano and singing.

In 1954, Murphy moved to New York City, working part-time as an actor and singer. He appeared in productions for the Gilbert and Sullivan Light Opera Company and a musical version for television of Casey at the Bat. Also, he twice took second place at the Apollo Theatre amateur contests.

Gabler compared Murphy to Mel Tormé and predicated that his impact would scare Frank Sinatra.

His resulting debut recording was Meet Mark Murphy (1956),[2] followed closely by Let Yourself Go (1957). These are both now reissued on one CD entitled Crazy Rhythm: His Debut Recordings (Decca GRD-670).

In 1958 Murphy moved to Los Angeles and recorded for Capitol, but returned to New York in the early '60s and recorded the now classic jazz album Rah! (1961) on Riverside Records, performing "Angel Eyes", a famous version of Horace Silver's "Doodlin'", and "Green Dolphin Street", featuring legendary jazz players Bill Evans, Clark Terry, Urbie Green, Blue Mitchell and Wynton Kelly. This album has been recently reissued [1993] by Fantasy Records. His favorite recording to date, That's How I Love the Blues, soon followed. In 1963, Murphy hit the charts across the country with his single of "Fly Me to the Moon" and was voted New Star of the Year in Down Beat Magazine's Reader's Poll.

In the late 1960s Murphy moved to London, England, where he worked primarily as an actor. He continued however, to cultivate his jazz audiences in Europe. He returned to the States in 1972 and began recording an average of an album a year for more than fourteen years on the Muse label.[1] These projects - including the highly acclaimed Nat King Cole Songbook Vol. I and II, Bop for Kerouac, Kerouac Then And Now, Living Room, Satisfaction Guaranteed, Beauty And the Beast and his classic, Stolen Moments - garnered widespread critical acclaim and numerous Grammy nominations. This last album contains Oliver Nelson's instrumental standard "Stolen Moments" with lyrics by Murphy.

In 1984 together with Viva Brasil he recorded the album Brazil Song (Cancões do Brasil), which featured original material written by the cream of Brazilian songwriting including work by Antonio Carlos Jobim and Milton Nascimento.

In 1987, He recorded Night Mood, an album of songs by Brazilian composer Ivan Lins, followed by the Grammy-nominated September Ballads on Milestone Records. Murphy has also appeared on U.F.O.'s last two releases (for Polydor Records), in which he has written and rapped lyrics on songs composed with the group. This collaboration opened up further new audiences in the acid-jazz and hip-hop genres, demonstrating jazz's timelessness while transcending generations and styles.

In August 1997, BMG/RCA Victor released Song For The Geese, for which he has received his sixth Grammy nomination, an evocative, ethereal foray into the world of vocalese and arguably his most stunning work yet. Also in August 1997, the 32 Records label Joel Dorn and Michael Bourne released a double CD retrospective Stolen and Other Moments, which features some of his best recordings for the Muse label (now defunct). The CD features material from the two "Kerouac" albums and a tasteful selection of "the best of Mark Murphy".

Murphys release Once to Every Heart (2005), on the Verve label, features sensuous ballads, where the listener can capture him singing in top form, with superb musicians and sounding better than ever. In 2007 Love is What Stays was released on Verve. Both albums were produced by German trumpeter Till Brönner.

Murphy has also collaborated with Five Corners Quintet, a modern Finnish jazz band. He appears on their albums Chasin' the Jazz Gone By (2005) and Hot Corner (2008).

In 2010 he released the independently-produced CD, Never Let Me Go, on which he is supported by pianist Misha Piatigorsky, bassist Danton Boller and drummer Chris Wabich.

Murphy has continued to tour internationally into his 80s, appearing at festivals, concerts, in the best jazz clubs and on television programs, throughout the U.S., Europe, Australia and Japan, as well as other places. He is one of the most important jazz vocalists of our time.[1]

This article uses material from the article Mark Murphy (singer) from the free encyclopedia Wikipedia and it is licensed under the GNU Free Documentation License.