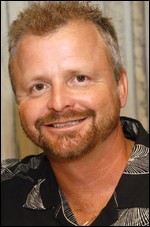 Frank Joseph Myers (born in Dayton, Ohio) is an American country music singer, songwriter and record producer. In his career, he has written songs for John Michael Montgomery, Eddie Rabbitt, Crystal Gayle, Lonestar and others. In 1995, he and frequent songwriting partner Gary Baker (formerly of The Shooters) recorded one album on Curb Records as the duo Baker & Myers.

Frank is the son of Melvin Pee Wee Myers(-1984) and Eva. Frank married Belinda in 1980 and has 2 sons Josh and Nick, and a daughter, Jessica. Frank has 2 brothers Melvin and Doug and 2 sisters Betty and Joyce.

Frank J. Myers grew up in Dayton, Ohio and graduated from Northridge High School. He returns yearly to hold a concert "Country on the 'Ridge" as a fundraiser for the school's Alumni Hall of Fame. His father, Melvin Pee Wee Myers, was a champion fiddle player and singer who taught Frank how to play the guitar. Frank started performing at age 11. After winning a local contest called StarTrail he started opening shows at Dayton's Hara Arena. He still has close ties with the community. [1]

At 14 he guest-starred on the Porter Wagoner TV show. Frank and his brother Melvin Jr. formed a group called "Country Earth" with Paul Barton and Ted Hartman. During his time in Country Earth he met his wife Belinda Watkins. They married on 7 June 1980.

In 1981, Myers and his wife moved to Nashville, Tennessee to pursue his career in the music business. Myers was hired by Eddy Raven as a guitar player. He later became the band leader and road manager for Raven. It was within this time while working for Eddy that Myers started writing, playing, and co-producing songs. They produced two number ones, five number twos, and three top ten songs. These include "I Got Mexico", "Bayou Boys", "You Should've Been Gone By Now", and "Sometimes A Lady".

In 1982, Myers wrote "You and I" for his wife. It became his first single by Eddie Rabbitt and Crystal Gayle. "You and I" was the number one country song for four weeks, number two AC for two weeks, and number six Pop for 4 weeks. While working for Raven, Myers met Gary Baker with whom he later became the songwriting duo Baker & Myers.

Myers left Eddy in 1990 to play for Marie Osmond. He was also able to get Baker a job with Marie playing base after Gary's band The Shooters disbanded. It was during this time that Frank and Gary's songwriting flourished. They had their first number one together in 1993 called "Once in a Lifetime" by Alabama.

In 1987, Frank and Gary wrote the song "I Swear" which was recorded by John Michael Montgomery and All-4-One in 1994. "I Swear" has received numerous awards including a Grammy Award for "Country song of the year" and A.C.M. Award for Single and Song of the Year along with going number one in numerous countries.

In 2006, Myers produced his first solo album, Scrapbook, for FJM Productions. It is an album of hit songs Myers has written over the years and sung by Frank himself. The first song, "You and I", Myers sings with Crystal Gayle who originally sang it with Eddie Rabbitt.

In 2008, Myers wrote seven songs and produced Richie McDonald's album I Turn to You and also co-produced his Christmas CD If Everyday Could Be Christmas. As of late, he continues to work with other artists writing and producing songs.

This article uses material from the article Frank J. Myers from the free encyclopedia Wikipedia and it is licensed under the GNU Free Documentation License.