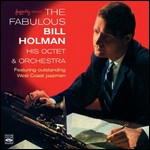 Although he has performed and recorded as a tenor saxophonist, Holman is best known as an arranger.[1][2] Through his acquaintance with Gene Roland, Holman was auditioned by Stan Kenton and hired as a tenor sax player around 1951.[1]

Kenton was apparently attracted to Holman's ability to integrate counterpoint and dissonance in subtle yet distinctive ways, and for his knack for making the usually unswinging Kenton band "swing" in its own particular fashion. Holman became Kenton's chief arranger, and wrote much of Kenton's 1950s repertoire; including one of Kenton's finest albums, Contemporary Concepts. He continued to write for Kenton, on and off, throughout the 1960s and 70s.

In addition to his work for Kenton, Holman has provided charts for Woody Herman, Doc Severinsen, Buddy Rich, Terry Gibbs, Count Basie, Gerry Mulligan's Concert Jazz Band and others. He formed his own California-based band in 1975 and continues to perform with it in the U.S. and worldwide. His 1997 recording Brilliant Corners/The Music of Thelonious Monk won a Grammy award.[3]

in 1969, Ella Fitzgerald recorded "Give Me the Simple Life" with Holman's arrangement on her live album Sunshine of Your Love.

Bill Holman is also credited with brass arrangements on The Fifth Dimension's 1969 album, The Age of Aquarius.

He received his honorary doctorate through Elmhurst College of Illinois.

This article uses material from the article Bill Holman (musician) from the free encyclopedia Wikipedia and it is licensed under the GNU Free Documentation License.