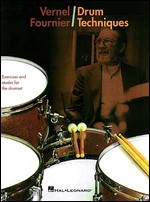 Fournier was born in New Orleans, Louisiana, into a Creole family. He left college to join a big band led by King Kolax. After Kolax downsized to a quintet, Fournier moved to Chicago in 1948,[2] where he played with such musicians as Buster Bennett, Paul Bascomb and Teddy Wilson. As house drummer at the Bee Hive club on Chicago's South Side in 1953-55, he accompanied many visiting soloists, including Lester Young, Ben Webster, Sonny Stitt, J.J. Johnson, Earl Washington and Stan Getz.[1]

From 1953 to 1956, Fournier also worked many recording sessions with Al Smith, Red Holloway, Lefty Bates, and others. He joined Ahmad Jamal’s trio in 1957, along with bass player Israel Crosby, and remained with the group until 1962, appearing on a series of recordings for the Chess label. The best known of these, At the Pershing: But Not for Me (1958), became one of the best selling jazz records of all time,[1] remaining on the Billboard jazz charts for over two years.[1]

After leaving the Jamal trio, Fournier joined George Shearing for two years before rejoining Jamal briefly in 1965-66. He then took a long-running gig with a trio at a restaurant owned by Elijah Muhammad.

He converted to Islam in 1975, and took the Muslim name of Amir Rushdan.[3]

He worked with Nancy Wilson, Clifford Jordan, Billy Eckstine and Joe Williams, John Lewis and Barry Harris. Fournier was also a teacher of drumming, working at Barry Harris’s Jazz Cultural Theater, the New School, and the Mannes College of Music.

A stroke in 1994 made left him unable to use his legs and confined him to a wheelchair. Although he was unable to play drums professionally, after his stroke, he continued his teaching activities. He died from a cerebral hemorrhage in Jackson, Mississippi, in 2000.

This article uses material from the article Vernel Fournier from the free encyclopedia Wikipedia and it is licensed under the GNU Free Documentation License.