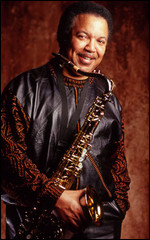 Ronald Edward "Ron" Holloway (born August 24, 1953, Washington, D.C., United States) is an American tenor saxophonist.[1] He is listed in the Biographical Encyclopedia of Jazz where veteran jazz critic Ira Gitler described Holloway as a "bear-down-hard-bopper who can blow authentic R&B and croon a ballad with warm, blue feeling."[1] Holloway is the recipient of 42 Washington Area Music Awards, or Wammies, two of which he received as musician of the year.[2] Holloway has worked with Susan Tedeschi,[3][4] Dizzy Gillespie,[5][6] Gil Scott-Heron[7] and Root Boy Slim.[8] He is currently a member of The Warren Haynes Band.[9][10]

Ron Holloway was born to Winston and Marjorie Holloway, avid jazz fans who met while attending Howard University in Washington, D.C. Holloway recalls his father adding to his collection of Prestige and Blue Note jazz albums; something he has kept up until the present day. Holloway's parents, while not musicians, provided a nurturing musical environment for their son.[11] Holloway's father favored the saxophone and trumpet-led albums and particularly enjoyed the great horn soloists.[12]R&B-influenced Willis Gator Jackson was easiest to grasp at first, but soon he identified the sounds of Sonny Rollins,[13] John Coltrane and Miles Davis as his principle influences.[14]

After high school graduation, Holloway routinely practiced 812 hours a day along with sitting in with bands of all kinds, in jam sessions, which resulted in broadening his versatility. He became familiar with a wide variety of genres. Holloway would frequently perform with jazz, R&B, funk, rock, jazz fusion, blues, country and folk music groups, within the same week.[15][16] As the Washington D.C. music scene continued to thrive in the 1970s, Holloway joined his first D.C. based bands; popular R&B groups called 'The Sounds of Shea' and 'Mad Dog & the Lowlifers'.[17]

In 1974, Holloway went to see Freddie Hubbard in concert and brought an audio cassette tape he'd made while rehearsing to one of Hubbard's recordings. During the intermission he introduced himself and played the tape for Hubbard. After hearing the tape, Hubbard invited Holloway to come back and play with him that Sunday night. He did so and at the end of the performance Hubbard extended an open invitation to sit in with him whenever Hubbard was in town.[8] The next year, Sonny Rollins conducted a clinic at Howard University. Backed by a rhythm section composed of local musicians, Rollins invited the young horn players onstage. Holloway joined him on Rollins' "Playin' in the Yard". After his solo, Holloway received a standing ovation from the audience. Rollins and Holloway remained in touch afterwards, becoming good friends.[18] The friendship and respect between the two ran both ways. Rollins has been equally generous in his praise of Holloway over the years and has mentioned him in several interviews as one of his favorite young tenor players.[19][20][21] Holloway enjoyed "his sense of organic construction, ambidextrous timing, humorous quotes, swagger, keen sense of drama and unique tonal texture."[22]

In the summer of 1977 a new club opened and the performers included Rollins, Hubbard and Dizzy Gillespie. Holloway approached Gillespie's dressing room and as he had done with Rollins, brought a tape with him- this time of his performance with Rollins. After Gillespie listened to the tape, he asked Holloway if he had brought his horn, to which Holloway confessed he hadn't because he was concerned about appearing presumptuous. Holloway found himself performing with Gillespie all week. Afterwards, he had a standing invitation to sit in with the band.[8][23][24] In 1979 Holloway sat in with Dizzy Gillespie at Ronnie Scott's Jazz Club in London, England. Holloway continued to sit in with Gillespie well into the eighties and on June 6, 1987, performed with a large group of musicians honoring Gillespie at Wolf Trap National Park for the Performing Arts.[25]

In 1979 Root Boy, Holloway and the rest of the Sex Change Band participated in a film entitled Mr. Mike's Mondo Video which was written by Michael O'Donoghue of Saturday Night Live fame. Mondo Video was not broadcast as NBC deemed it "sick"[26] while Spin later referred to it as "A TV pilot too dangerous to air."[27] In the early 1980s, Root Boy and Holloway made cameo appearances in a film made by the D.C. area comedy group known as The Langley Punks, for their Travesty Films group. Holloway recorded four albums with Root Boy and at least three 45's: "Too Much Jawbone" with "Xmas at K-Mart" on the flip side, "The Meltdown" backed with "Graveyard of Losers" and "Dare To Be Fat" on I.R.S. Records. Holloway was a member of several Root Boy configurations from 1977-1987.[28]

Holloway's tenure with Root Boy Slim overlapped with two other groups. The first was a local funk band called Osiris. Holloway first met Osiris Marsh in 1979 and found their influences included bands with eclectic tastes ranging from Parliament-Funkadelic, Earth, Wind, and Fire, and Sly and the Family Stone. In addition, Osiris was interested in the culture of ancient Egypt and African American roots music. The members of Osiris were Osiris Marsh on lead vocals, Tony Jones and Tyrone "Ty" Brunson on bass guitars, Maceo Bond on keyboards, Brent Mingle on guitar, Jimmy "Sha-Sha" Stapleton on percussion and Holloway on tenor and soprano saxophones. As a band they produced "the most unalloyed, dirty and downright nasty Funk imaginable." [29] Marsh, who wrote or co-wrote the majority of the band's songs with Bond and Brunson, produced an independent studio album on the band's own label, "Tomdog", titled Since Before Our Time in 1978. In 1979, Warner Bros. Records picked it up, remixed and repackaged it. Another album, O-Zone, on Marlin Records, met with similar reviews and faced the same overall inability to overcome the dance floor fever that enticed many funk and soul listeners towards disco, as the 1970s came to an end. Holloway played with Osiris from 1979 to 1981.[30]

In November 1981 Holloway visited a landmark D.C. club; Blues Alley, where he had been told jazz drummer Norman Connors would be performing. He brought his horn and upon arriving spotted Connors and introduced himself. With an invitation from Connors, he sat in on the next set, getting a good response from the audience. Afterward, Holloway was approached by singer and spoken word artist, Gil Scott-Heron, who complimented him and extended an offer to join his group, the "Amnesia Express".[31] In February, 1982 Holloway played his first concert with Scott-Heron at the Bottom Line in New York City with fellow saxophonist and Amnesia Express co-founder Carl Cornwell.[32] The press appreciated his contributions as well, commenting on his performance in several reviews.[33][34] It happened that, early in 1982, Holloway was on board when filmmaker Robert Mugge documented Scott-Heron's concert at the Wax Museum nightclub in Washington, D.C. The film is called Black Wax.[35] Holloway found his playing evolving while in the band, commenting, "I got so many things together on my horn while playing with Gil. It was really a valuable period of self discovery." Holloway was a member of Scott-Heron's group from February 1982 until June 1989.[31]

Though he was a member of Scott-Heron's group during this period, Holloway continued to appear with Gillespie whenever he would perform in D.C.[36] In June 1989 he was sitting in with Dizzy at Blues Alley.[37] During the intermission, Gillespie sent his manager to find Holloway. Gillespie surprised Holloway with the statement he was in need of a sax player. Holloway accepted and found himself touring the world with Gillespie, performing for audiences that varied from club capacity[38] to popular American television shows which included the Johnny Carson and Arsenio Hall shows.[39][40] During his tenure with Gillespie, Holloway recorded two albums with the trumpeter; The Symphony Sessions on Pro Arte[41][42][43] and Dizzy Gillespie - Live! at Blues Alley,[44] on the Blues Alley imprint. He also played the top Jazz and music festivals,[45][46] clubs,[47][48][49] theaters and concert halls[50] around the world with Gillespie.[8] Holloway was a member of Gillespie's quintet from June 1989 until his death on January 6, 1993.[51][52][53]

In the fall of 1993, Holloway recorded an album and sent the demo to his mentor, Sonny Rollins. Rollins, then forwarded the recording to Fantasy Records and Holloway was signed to Milestone Records, one of Fantasy's subsidiary labels, within a week's time.[54] To date, Holloway has released four albums on Fantasy's Milestone Records label [55] and another on the Jazzmont label.[56][57]

Holloway met Derek Trucks in 2002 aboard Trucks' tour bus just outside the entrance to Rams Head Onstage, in Annapolis, Maryland. Trucks surprised him with his vast knowledge of various musical genres. Holloway has since performed with Trucks many times as a guest of The Derek Trucks Band and The Allman Brothers Band, toured with both the Susan Tedeschi Band (of which Holloway was a member) and the band co-led by Trucks and Tedeschi for a couple of summers, "Soul Stew Revival".[58][59]

On September 30, 2004, Little Feat were scheduled to open for the Allman Brothers Band at Nissan Pavilion in Bristow, Virginia. Holloway was to accompany Little Feat. Aside from Little Feat, Holloway found himself in the company of the two featured guitarists in The Allman Brothers Band. This was the first time he had heard the band with its current lineup. Warren Haynes invited Holloway to sit in with the band and at the close of the concert, he performed on one of the classic tunes made famous by the band; "Southbound".[60] Haynes invited Holloway to appear with Gov't Mule afterward at the 9:30 Club in Washington, D.C., and they performed two consecutive nights on October 27 and 28, 2004 before a packed house, recording both nights. The next year, in the summer of 2005, guitarist Jack Pearson and Holloway toured with The Allman Brothers Band, filling in for an ailing Warren Haynes.[61][62] It was the beginning of many performances where Holloway appeared with The Allman Brothers Band and Gov't Mule, playing the Beacon Theatre in New York City, Nissan Pavilion in Bristow, Virginia, the Wanee Festival in Live Oak, Florida,[63] Merriweather Post Pavilion in Columbia, Maryland,[64] Warner Theatre (Washington, D.C.)[65] and The Warren Haynes Christmas Jam,[66][67][68] which Haynes hosts annually, in Asheville, North Carolina.

In October, 2005 Holloway finally heard blues and soul singer, Susan Tedeschi perform with her own group at Rams Head Live! in Baltimore, Maryland. Tedeschi and Holloway met previously a couple of years before while guesting with her husband, Derek Trucks, at the Wanee Festival and a show at The Birchmere, (in suburban Virginia, just outside Washington, D.C.). After renewing their acquaintance and performing that night, Tedeschi invited Holloway to join her band. For the next few years, the band toured across Europe[70][71] and extensively throughout the United States, playing major festivals,[72] concert halls,[73] theaters[74] and clubs. Tedeschi, along with her band have also appeared on Late Night with Conan O'Brien [75] and have been seen on countless local news spots as they toured across the United States. Along with the airplay her recordings receive, Tedeschi has performed live many times on radio stations across the country, including NPR.[76] Holloway was a member of Tedeschi's band for four years.[4]

Having been introduced to Gregg Allman while playing with The Allman Brothers Band, Holloway encountered his son, Devon Allman at the Iota Club & Cafe in Arlington, Virginia on March 31, 2009 when Devon's band Honeytribe performed there. Allman contacted Holloway when his band, Honeytribe were preparing to record their second album and had need of a saxophone player. Holloway traveled to Memphis, Tennessee and spent two days recording with the band at Ardent Studios[77] for Honeytribe's sophomore release; Space Age Blues. The CD was released in October 2010 to positive reviews.[78][79][80]

In February 2009, Warren Haynes began work on a solo project at Pedernales Studio, in Austin, Texas with Gordie Johnson as co-producer and engineer. The recording featured George Porter Jr. on electric bass, Ivan Neville on keyboards, Raymond Weber on drums, Ian McLagan on additional keyboards, Ruthie Foster on vocals and Holloway on tenor saxophone.[10][81] The resulting album, Man in Motion, was released on May 10, 2011 on the Stax/Concord Music Group label.[82]

This article uses material from the article Ron Holloway from the free encyclopedia Wikipedia and it is licensed under the GNU Free Documentation License.