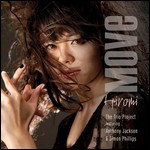 Hiromi Uehara (上原 ひろみ, Uehara Hiromi, born 26 March 1979), known professionally as Hiromi, is a jazz composer and pianist born in Hamamatsu, Japan. She is known for her virtuosic technique, energetic live performances and blend of musical genres such as stride, post-bop, progressive rock, classical and fusion in her compositions.[1]

Hiromi started learning classical piano at the age of six,[2] and was later introduced to jazz by her piano teacher Noriko Hikida. At 14, she played with the Czech Philharmonic Orchestra. When she was 17, she met Chick Corea by chance in Tokyo and was invited to play with him at his concert the next day. After being a jingle writer for a few years for Japanese companies such as Nissan, she enrolled to study at Berklee College of Music in Boston, Massachusetts.[3] There, she was mentored by Ahmad Jamal and had already signed with jazz label Telarc before her graduation.

Since her debut in 2003, Hiromi has toured the world and appeared in numerous jazz festivals. She performed at the Newport Jazz Festival on August 8, 2009, and at the Paris Olympia in Paris on April 13, 2010, and toured in the summer of 2010 with the Stanley Clarke Band.

Hiromi's trio initially consisted of bassist Mitch Cohn and drummer Dave DiCenso. In 2004, she recorded her second album Brain with fellow Berklee alumni bassist Tony Grey and drummer Martin Valihora and recorded and toured with them until 2009. Bassist Anthony Jackson and drummer Steve Smith were guest artists on two Brain tracks and is featured on her 2011 album Voice. Smith left the trio near the end of 2011, and the British drummer Simon Phillips made with her the 2012 album Move, the 2014 album Alive, and the 2016 album Spark.[4] Her most recent tour (2019) featured Anthony Jackson and Simon Phillips. Her 2016 album Spark reached the #1 position on the US Billboard Jazz Albums chart for the week of April 23, 2016.[5]

The trio has remained with Anthony Jackson and Simon Phillips.

On October 19, 2006, the trio added guitarist David Fiuczynski in a performance at the Jazz Factory in Louisville, Kentucky, to form Hiromi's Sonicbloom. He is also featured in the albums Time Control and Beyond Standard. Due to Fiuczynski's teaching commitments at Berklee, guitarist John Shannon performed with the group when Fiuczynski was unavailable.

Studio albums (as "The Trio Project")

Hiromi married Japanese fashion designer Mihara Yasuhiro in 2007, after meeting him to perform at his fashion show in Milan the year before[12]. She is quoted by fashion magazine Women's Wear Daily as saying: "I wear [his designs] almost every day".

This article uses material from the article Hiromi Uehara from the free encyclopedia Wikipedia and it is licensed under the GNU Free Documentation License.