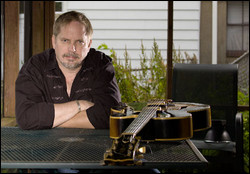 Dave Stryker (born March 30, 1957) is an American jazz guitarist. He has 25 CDs as a leader to date, and has been a featured sideman with Stanley Turrentine, Jack McDuff, and Kevin Mahogany, among others. Gary Giddins in the Village Voice calls him one of the most distinctive guitarists to come along in recent years. He was recently voted one of the Top Guitarists in the 2013 Critics and Readers Poll of Down Beat, and previously was elected a Rising Star in the 2004-2007 Downbeat Critics Poll.

Stryker grew up in Omaha, Nebraska, moved to New York City in 1980, and joined organist Jack McDuffs group, travelling all over the U.S. for two years (198485). From 1986 to 1995,and 1998-2000 Stryker played with tenor saxophonist Stanley Turrentine, performing at all the major festivals, concert halls, and clubs throughout the world.

He currently leads his own group The Dave Stryker Organ Trio, as well as his Blue to the Bone Band. He co-leads The Stryker / Slagle Band with saxophonist Steve Slagle.

Dave is also involved in passing along his experience by teaching. He is Adjunct Professor Of Jazz Guitar at Indiana University and Adjunct Professor of Jazz Guitar at John J. Cali School of Music Montclair State University. He also teaches privately and at the Aebersold Summer Jazz Workshop, the Litchfield Jazz Camp, the JazzHouse Kids Workshop, and many other workshops all over the world. His book Dave Strykers Jazz Guitar Improvisation Method, is available from Mel Bay Publications and at www.davestryker.com.

This article uses material from the article Dave Stryker from the free encyclopedia Wikipedia and it is licensed under the GNU Free Documentation License.