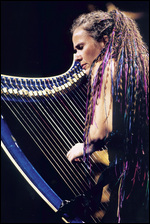 Deborah Henson-Conant (b. Stockton, California, November 11, 1953) is an American harpist and composer, known for her flamboyant stage presence and her innovation with electric harps.[1]

She describes herself on her website as "cross-genre: jazz-pop-comedy-folk-blues-flamenco-celtic". Deborah performs one-person shows in theaters, concert halls and festivals. She also performs her original music/theatre shows with symphony orchestras. Her performances mix music with theatrical and story elements. She orchestrates all her own music when she plays with symphony and often engages symphonic musicians in unexpected ways.

The soundtrack of her 2006 DVD release, Invention & Alchemy received a Grammy nomination, and the video version began broadcast on American public television in 2007.[2] Her performance series Inviting Invention (2006) presented a series of "performance explorations" that included both musical and non-musical guests collaborating onstage with Henson-Conant.

As you know, a lot of my music is compositional, and there's a lot of arpeggiated guitar parts. They work really well on the harp, especially since it's an electric harp and you can process it. Deborah does a really great job with that, adding those textures. ... I've studied it very precisely. I can't play it, but I understand it. What Deborah has is a little different because she has a strap-on harp with a particular range.

This article uses material from the article Deborah Henson-Conant from the free encyclopedia Wikipedia and it is licensed under the GNU Free Documentation License.