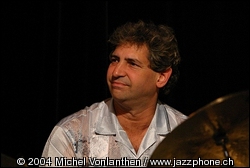 Danny Gottlieb (born April 18, 1953) is an American drummer. In 2004 he became the drummer for Gary Sinise's Lt. Dan Band. He is also known for his time with the Pat Metheny Group, as co-founder of the group Elements with Mark Egan, and as a member of the Gil Evans Orchestra until Evans's death in 1988. He has performed on over 400 albums, earning 14 Grammy Award nominations and four wins. He is a member of the University of North Florida faculty, where he teaches as a full-time Professor of Jazz Studies.

Gottlieb has made over ten instructional DVDs, including Drumming Masterclass and, with Joe Morello, Natural Drumming (vol. 1–3, Mel Bay). He wrote the textbook The Evolution of Jazz Drumming, which was influenced by interviews done with Mel Lewis by Loren Schoenberg, director of the New York Jazz Museum.

Daniel Richard Gottlieb was born in New York. He took lessons from Mel Lewis and Joe Morello and graduated from the University of Miami in 1975. Morello was his lifelong teacher, beginning in 1968 and through the late 1990s. Danny also studied with Ed Soph, Bob Moses, Gary Chester, Jack DeJohnette, and Harold Jones. He became a member of the Gary Burton Quartet in 1976 with Pat Metheny, and then was one of the original members of The Pat Metheny Group from 1977–1983. Bassist Mark Egan was also in Metheny's first group. Egan and Gottlieb formed the band Elements.[1] In 1984 he was a member of the Mahavishnu Orchestra led by guitarist John McLaughlin.[2]

This article uses material from the article Danny Gottlieb from the free encyclopedia Wikipedia and it is licensed under the GNU Free Documentation License.