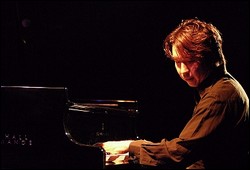 He began playing organ at two and by seven was an improviser. He appeared on Japanese television with his father from 1968 to 1970. At twelve he switched to piano after being impressed by albums by Oscar Peterson. In 1980 he entered the Berklee College of Music and later worked with Gary Burton. He also had his debut in 1983 before returning to his native Japan.

Ozone has collaborated with vocalist Kimiko Itoh. They appeared as a duo at the Montreux Jazz Festival,[1] and he produced her album Kimiko, which won the 2000 Swing Journal jazz disk grand prix for Japanese vocalist.[2]

In September 2003, Ozone was awarded an Honorary Doctorate of Music from Berklee College of Music.[3]

This article uses material from the article Makoto Ozone from the free encyclopedia Wikipedia and it is licensed under the GNU Free Documentation License.