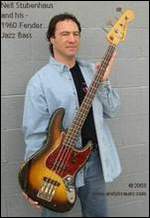 He started his musical training playing drums and switched to bass guitar at the age of 12. He studied at the Berklee College of Music where he graduated in 1975. After graduation, he was recommended by Steve Swallow and started teaching while playing in a band with another Berklee student Steve Smith (Vital Information, Journey). While at Berklee, Neil met Vinnie Colaiuta (Sting, Frank Zappa, session) and John JR Robinson (Barbra Streisand, Quincy Jones, Chaka Khan, Michael Jackson, renowned session musician).

In 1977 he joined Blood Sweat & Tears and recorded David Clayton-Thomas' first solo album. In 1978, he went on tour with Larry Carlton. That led him to move to the West Coast where, following recommendations from Carlton, he met Mike Post and other composers and started doing sessions. Since 1979, Stubenhaus performed on more than 600 albums (of which 70 + have been Grammy-nominated), over 20 Grammy-winning songs and 60 + Gold and/or Platinum records. He has also recorded over 150 movie soundtracks as well as countless jingles and commercials.

In 2000, Neil was a participant in Star Licks Productions', All-Star Bass Series.

This article uses material from the article Neil Stubenhaus from the free encyclopedia Wikipedia and it is licensed under the GNU Free Documentation License.