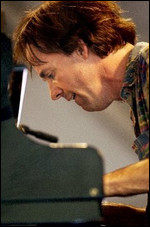 Tom McDermott is a pianist and composer born in St. Louis, Missouri, USA in 1957. He began studying piano at age six,[1] became a professional musician at 16, and received a Master of Music degree from Washington University in St. Louis in 1982. Two years later he moved to New Orleans and became noted for the styles of jazz associated with that town, especially Dixieland jazz and ragtime. He was in the group "Dukes of Dixieland" through much of the 1990s. In 1994 he co-founded and wrote arrangements for the innovative brass band the New Orleans Nightcrawlers. He has released nine CDs as a leader, and has received praise from the New York Times, Rolling Stone magazine, the Los Angeles Times and other publications. Since 2001 he has devoted much time travelling to Brazil, where he has studied and recorded Brazilian choro music.

McDermott is also a journalist, writing primarily about music and travel. He has explained that he is of Irish Catholic and Swedish descent.

This article uses material from the article Tom McDermott (musician) from the free encyclopedia Wikipedia and it is licensed under the GNU Free Documentation License.