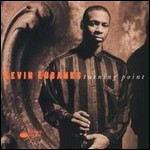 Kevin Tyrone Eubanks (born November 15, 1957 in Philadelphia) is an American jazz and fusion guitarist and composer who was the leader of The Tonight Show Band with host Jay Leno from 1995 to 2010. He also led the Primetime Band on the short-lived The Jay Leno Show.

Eubanks was born into a musical family. His mother, Vera Eubanks, is a gospel and classical pianist and organist. His uncle, Ray Bryant, was a jazz pianist. His older brother, Robin Eubanks, is a trombonist, and his younger brother Duane Eubanks is a trumpeter. Two cousins are also musicians, the late bassist David Eubanks and the pianist Charles Eubanks. Kevin studied violin and trumpet before settling on the guitar.

As an elementary school student, Eubanks was trained in violin, trumpet, and piano at the Settlement Music School in Philadelphia. He later attended Berklee College of Music in Boston and then moved to New York to begin his professional career.

Eubanks is a pescetarian and maintains a diet of fresh fruits, vegetables, grains, egg whites, and fish.[1] He is also an avid fan of Philadelphia sports teams. He once lost a bet on the Philadelphia 76ers, and he was forced to eat a corn dog when he lost. In 2007, he was voted PETA's "World's Sexiest Vegetarian Man".[2]

After Eubanks moved to New York, he began performing with noted jazzmen such as Art Blakey (1980–81), Roy Haynes, Slide Hampton and Sam Rivers. Like his brother Robin, he has played on record with double bassist Dave Holland.[3] In 1983, while continuing to perform with others, he formed his own quartet, playing gigs in Jordan, Pakistan, and India on a tour sponsored by the U.S. State Department.

His first recording as a leader, Guitarist, was released on the Elektra label when Eubanks was 25 years old. It led to a seven-album contract with the GRP label and four albums for Blue Note. In total, Eubanks has appeared on over 100 albums. In 2001, he founded the label Insoul Music on which he has released six albums.

Eubanks has taught at the Banff School of Fine Arts in Canada, at Rutgers University, and at the Charlie Parker School in Perugia, Italy. In 2005, Eubanks received an honorary doctorate degree from his alma mater, Berklee College of Music. He is a member of Kappa Alpha Psi fraternity and has served as an active member of the Artistic Advisory Panel of the BMI Foundation since 1999.

When NBC moved Leno's show from late night to primetime (10PM in the Eastern time zone), Eubanks moved with the band to continue conducting the music for the short-lived The Jay Leno Show. Eubanks appeared on the new show as The Primetime Band. It was announced on February 16, 2010 that Eubanks would only be returning for a short time as band leader when Jay Leno began his second tenure on The Tonight Show.[5]

On April 12, 2010, Eubanks announced on the show that he would be leaving The Tonight Show following its 18th season.[6] His last show was on Friday, May 28, 2010. Eubanks indicated in an interview with The Philadelphia Inquirer that he wanted to refocus on music, adding that his leaving was not provoked by any problems with Leno or NBC.[7] Following his departure from The Tonight Show, Eubanks began touring with bandmate Marvin "Smitty" Smith on drums and Bill Pierce on sax.

On February 21, 2013, Eubanks had a performance slot on The Tonight Show, and then joined Leno for an interview.

This article uses material from the article Kevin Eubanks from the free encyclopedia Wikipedia and it is licensed under the GNU Free Documentation License.