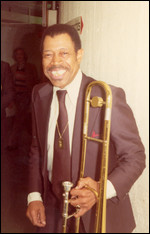 As states Scott Yanow in his artist biography on Allmusic,[1] Al Grey's trademark phrases and often humorous use of the plunger mute long made him quite distinctive. After getting out of the service, he was with the orchestras of Benny Carter (1945-1946), Jimmie Lunceford (1946-1947), Lucky Millinder, and Lionel Hampton (off and on during 1948-1953). Grey was a well-featured soloist with the classic Dizzy Gillespie globetrotting orchestra during 1956-1957 (taking an exciting solo at the 1957 Newport Jazz Festival on a blazing version of "Cool Breeze"). He was with Count Basie's orchestra on three separate occasions (1957-1961, 1964-1966, and 1971-1977), led a band with Billy Mitchell in the early '60s, and had a group with Jimmy Forrest after leaving Basie in 1977. In later years, Grey performed and recorded often with Clark Terry, made a CD with the Statesmen of Jazz, and for a time led a quintet that featured his son Mike Grey on second trombone. Al Grey recorded as a leader for Argo (1959-1964), Tangerine, Black & Blue, Stash, Chiaroscuro, and Capri, and co-led an excellent Pablo date in 1983 with J.J. Johnson. He died of complications from diabetes on March 24, 2000.

Al Grey was born in Aldie, Virginia and grew up in Pottstown, Pennsylvania. During World War II he served in the Navy where he started playing the trombone. Soon after his discharge, he joined Benny Carter's band and later the trombone section of Lionel Hampton.

After some solo work Grey joined Dizzy Gillespie's big band in 1956.[2] In October 1957, Count Basie needed a fill-in for his European tour and hired Grey. After 1961, Grey performed only occasionally with Basie. He is featured on Count Basie recordings with Ella Fitzgerald or Frank Sinatra and recorded "Snap your Fingers".

Apart from leading his own combos, he appeared with many jazz greats such as Herbie Hancock, Quincy Jones and even Ray Charles. His trombone skills were also featured on the soundtrack for The Color Purple.

Al Grey's early trombone style was inspired by Trummy Young. He developed a wild, strong and full sound. Solos often consisted of short, pronounced phrases with precisely timed syncopation. When playing with the plunger, however, he would produce the most mellow fill-ins and shape melodic answers to the lead voice. This aspect of his playing can be heard to great effect in response to Bing Crosby's vocals on the 1972 album, Bing 'n' Basie ("Gonna Build a Mountain" and "Put Your Hand in the Hand").

This article uses material from the article Al Grey from the free encyclopedia Wikipedia and it is licensed under the GNU Free Documentation License.