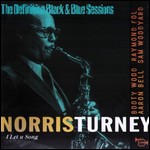 Turney began his career in the Midwest, playing in territory bands such as the Jeter-Pillars Orchestra. He played with Tiny Bradshaw in Chicago before moving to New York City, where he played with the Billy Eckstine Orchestra in 1945-46. Turney had little luck in New York, however, and returned to Ohio to play in local ensembles through the 1950s. He toured with Ray Charles in 1967, then was hired by Duke Ellington, in whose orchestra he played from 1969 to 1973. He was hired to play alto saxophone as an "insurance policy" due to the failing health of Johnny Hodges. He was the first flute soloist to ever play in Ellington's orchestra. He also played tenor saxophone in the band.

Following his tenure with Ellington, he played with the Savoy Sultans and the Newport All-Stars, as well as in several pit orchestras. In the 1980s, he toured and recorded as a member of the Oliver Jackson Quintet, with Ali Jackson, Irvin Stokes, and Claude Black.[1]

This article uses material from the article Norris Turney from the free encyclopedia Wikipedia and it is licensed under the GNU Free Documentation License.