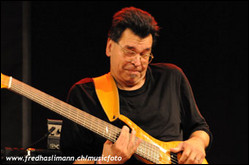 James Robert Haslip (born December 31, 1951) is an American bass guitarist who was a founding former member of the jazz fusion group the Yellowjackets.[1] He was also an early user of the five-string electric bass.[2]

Born in the Bronx to Puerto Rican immigrants, Spanish was Haslip's first language and he learned to speak English in kindergarten. His father, James Joseph (Jaime) Haslip (1915–1999) served in the United States Customs Service, beginning as a Merchant Marine until moving to patrolman and eventually deputy commissioner, marrying Jimmy's mother Virginia (Viera) Haslip (1912-2009) in 1937.[3]

Haslip moved to Huntington, New York when he was four years old. At age seven, he began playing drums and then moved onto other instruments such as trumpet and tuba[4] until playing bass at age 15.[5] Although he took music lessons and went to a private music school, he considers himself self-taught. He has said that he went to a local music shop with his father and purchased a right-handed bass (he is left-handed) and learned to play it upside down.[6]

In an interview with magazine JazzTimes, Haslip said he was surrounded by music as a young boy, from visiting nightclubs and concert venues to his peers. He explains that there was music in his house as well, from his older brother Gabriel listening to classic jazz, his father listening to Latin and orchestra jazz and his aunt listening to "sappy stuff like Jerry Vale and Johnny Mathis".[6] In high school, Haslip created his first band called Soul Mine with his high school classmates, playing soul music at school dances and parties.[4]

In the early 1970s, he toured alongside musicians, and moved to Los Angeles in 1976, where he played with guitarists Tommy Bolin and Harvey Mandel.[5] in addition to the Yellowjackets, he has worked with Jeff Lorber, Eric Marienthal, Bruce Hornsby, Rita Coolidge, Gino Vannelli, Kiss, Tommy Bolin, Allan Holdsworth, Marilyn Scott, Chaka Khan, Al Jarreau, Donald Fagen, and Anita Baker.

Haslip has released two solo albums: Arc,[7] and Red Heat, with Joe Vannelli, in 2000.[8][9] He remains active with the Yellowjackets, is part of a combo with Allan Holdsworth, Alan Pasqua, and Chad Wackerman.[10] Other collaborations include Jing Chi (with Robben Ford and Vinnie Colaiuta)[11] and Modereko.

Haslip was a member of the rock group Blackjack from 1979–1980 with Bruce Kulick, Sandy Gennaro, and Michael Bolton.[12] He also toured with guitarist Allan Holdsworth and drummer Virgil Donati.[13]

In 2012, Haslip took a year-long break—which later turned permanent[14]—from the Yellowjackets to spend more time with his family and focus on other musical projects. He was replaced by the son of Jaco Pastorius, Felix. Regarding this topic, he stated: "The primary reason for my hiatus is so that I can spend more quality time with my family", says Haslip. "I spent ten months on the road last year. The break will give me an opportunity to spend more time at home as well as work on other artistic endeavors, such as independently producing projects". Haslip adds, "This was not a rash decision and there is no animosity by any means. Everybody is still friends and I'm excited for the band and their upcoming plans with Felix".[15]

In a 1997 article, Haslip mentioned he has been a vegetarian since 1972 and leads a healthy life and enjoys exercising. He also said he has lost some of his music idols and mentors to drugs and violence including fellow bass player Jaco Pastorius.[3]

Haslip has a wife named Nancy, and they have three children. Haslip is also a fan of sports including football and baseball.[18]

This article uses material from the article Jimmy Haslip from the free encyclopedia Wikipedia and it is licensed under the GNU Free Documentation License.