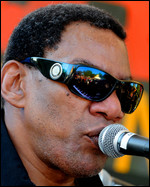 He is known for his technique and his ability to play in many styles of music. In 1987, New York Times music critic Jon Pareles wrote that Butler "revels in fluency and facility, splashing chords all over the keyboard and streaking through solos with machine-gun articulation.[2] In 1998, Chicago Tribune arts critic Howard Reich described Butler as "an enormous intellect matched by unusual physical strength."[3] Referred to by Dr. John as "the pride of New Orleans," Butler is his generation's representative in the Crescent City's lineage of piano players such as Professor Longhair, James Booker, Tuts Washington, and Jelly Roll Morton.

Butler was blinded by glaucoma in infancy.[4] His musical training began at the Louisiana State School for the Blind, where he learned to play valve trombone, baritone horn and drums before focusing his talents on singing and piano.[5] Butler was mentored at Southern University, in Baton Rouge, Louisiana, by clarinettist and educator Alvin Batiste.[6] Butler later earned a master's degree in music at Michigan State University in 1974, and received the MSU Distinguished Alumni Award in 2009.

In August 2005, Hurricane Katrina devastated Butler's home in the Gentilly section of New Orleans. His 1925 vintage Mason & Hamlin piano was wrecked by flood waters that rose to nearly eight feet inside his house.[7]

In the wake of Katrina's damage, Butler left New Orleans and briefly relocated to Colorado, living first in Boulder and then Denver. He later spoke of that Colorado period as "a trying exile."[8] In 2009, Butler relocated again to New York City.

Butler has pursued photography as a hobby since 1984, as an outgrowth of attending art exhibits in Los Angeles and asking friends to describe featured works.[9] His methods and photos were featured in an HBO2 documentary, Dark Light: The Art of Blind Photographers, that aired in 2010.[10] Butler's photographs also have been shown in galleries in New Orleans.[11]

This article uses material from the article Henry Butler from the free encyclopedia Wikipedia and it is licensed under the GNU Free Documentation License.