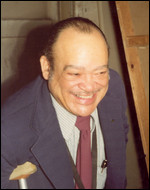 Arnett Cleophus Cobb (August 10, 1918 – March 24, 1989)[1] was an American jazz tenor saxophonist, sometimes known as the "Wild Man of the Tenor Sax" because of his uninhibited stomping style. Cobb wrote the words and music for the jazz standard "Smooth Sailing" (1951), which Ella Fitzgerald recorded for Decca on her album Lullabies of Birdland.

Born in Houston, Texas,[1] he was taught to play piano by his grandmother, and he went on to study violin before taking up tenor saxophone in the high school band. At the age of 15 he joined Louisiana bandleader Frank Davis's band, doing shows in Houston and throughout Louisiana during the summer.[2] Cobb continued his musical career with the local bands of trumpeter Chester Boone, from 1934 to 1936, and Milt Larkin, from 1936 to 1942 (which included a period on the West Coast with Floyd Ray). Among his bandmates in the Larkin band were Illinois Jacquet, Eddie "Cleanhead" Vinson, Tom Archia, Cedric Haywood, and Wild Bill Davis.[3] Having turned down an offer from Count Basie in 1939,[2] Cobb replaced Jacquet in Lionel Hampton's band in 1942, staying with Hampton until 1947. Cobb's featured solo on Hampton's theme song "Flying Home No. 2" generated much excitement, his blasting style earning him the label "Wild Man of the Tenor Sax".[2]

Cobb then started his own seven-piece band, but suffered a serious illness in 1950, which necessitated spinal surgery. Although he re-formed the band on his recovery, in 1956 its success was again interrupted, this time by a car crash. This had long-term effects on his health, involving periods in the hospital, and making him permanently reliant on crutches.[4] Nevertheless, Cobb worked as a soloist through the 1970s and 1980s in the U.S. and abroad. As late as 1988 he played with Jimmy Heath and Joe Henderson in Europe.[4]

This article uses material from the article Arnett Cobb from the free encyclopedia Wikipedia and it is licensed under the GNU Free Documentation License.