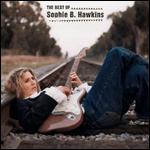 Sophie Ballantine Hawkins (born November 1, 1967, in Manhattan, New York City, U.S.) is an American singer, songwriter, musician and painter. Her biggest hits are "Damn I Wish I Was Your Lover", "Right Beside You", and "As I Lay Me Down".

Hawkins's debut album, Tongues and Tails, was released in 1992. It achieved both worldwide commercial success and critical acclaim, earning her a Grammy nomination for Best New Artist in 1993. The single "Damn I Wish I Was Your Lover" went to #5 on the Billboard Hot 100 singles' chart in the USA, and was also a top 20 hit in the UK. As a result of this success Sophie was asked to perform "I Want You" during "Bobfest" a concert held on October 16, 1992 in Madison Square Garden honoring Bob Dylan's 30th Anniversary as a musician.

Whaler, her second album, was released in 1994. Produced by Stephen Lipson, it also contained a US Top 10 hit, "As I Lay Me Down," and made gold status. Three singles from the album made the UK top 40, including "Right Beside You" which peaked at #13. It reached number 2 in the Dutch Top 40[1]

A 1998 documentary by Gigi Gaston, titled The Cream Will Rise, followed Hawkins during one of her tours and captured her struggle to deal with past troubles with her family, including her mother and brother. Music and riffs by Hawkins were included throughout the film.

Also in 1998, Hawkins's record company at the time, Sony Music, delayed the release of her third album. Its executives were unhappy with the finished product, and wanted Hawkins to rework some of the material. In particular, they were insisting that Hawkins remove a banjo track from one of the songs. Hawkins refused to accommodate them, citing artistic integrity as her main reason. After a lengthy battle between Hawkins and the company, the album, Timbre, was eventually released in 1999, though Sony declined to promote it. Hawkins subsequently left the label and founded her own label, Trumpet Swan Productions. In 2001, Timbre was re-released on Hawkins' label, now as a 2-disc set that contained new songs, demos, remixes, and videos.

Her first independently recorded and released album, Wilderness, was released in 2004.

Hawkins's website states that she is bisexual.[2] On November 18, 2008, she gave birth to a son, Dashiell Gaston Hawkins. He was named in part for Hawkins's longtime partner and manager, Gigi Gaston, who directed a documentary about Hawkins titled The Cream Will Rise.

In May 2010, Sophie affiliated herself with Waterkeeper Alliance, an organization of on-the-water advocates who patrol and protect over 100,000 miles of rivers, streams and coastlines in North and South America, Europe, Australia, Asia and Africa. Sophie is donating 100% of the proceeds of her single "The Land, the Sea, and the Sky" to the organization.

In August 2007, Hawkins headlined the first Los Angeles Women's Music Festival in support of the festival's dual agenda of supporting animal rescue groups and promoting and supporting female musicians. Hawkins is a vegan and a long-time supporter of animal rights.[3]

In February 2008, Hawkins re-recorded her hit "Damn I Wish I Was Your Lover" as "Damn, We Wish You Were President" in support of presidential candidate Hillary Clinton. Hawkins also wrote in her blog, "Hillary Clinton's achievements come from her heart. She has initiated so much positive change for families, children, victims of crime and the environment in her struggle for the forward movement of America and the working people of this nation."[4]

In February 2011, Hawkins performed at the Big Gay Party event staged by GOProud, an organization of gay conservatives, as part of this year's Conservative Political Action Conference festivities. After the show, Hawkins was interviewed and expressed her views on issues such as gun ownership, the free market, limited government and "identity politics".[5]

Wikiquote has a collection of quotations related to: Sophie B. Hawkins

This article uses material from the article Sophie B. Hawkins from the free encyclopedia Wikipedia and it is licensed under the GNU Free Documentation License.