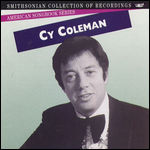 Coleman was born Seymour Kaufman on June 14, 1929, in New York City to Eastern European Jewish parents, and was raised in the Bronx. His mother, Ida (née Prizent) was an apartment landlady and his father was a brickmason.[1] He was a child prodigy who gave piano recitals at venues such as Steinway Hall, the Town Hall, and Carnegie Hall between the ages of six and nine.[2] Before beginning his fabled Broadway career, he led the Cy Coleman Trio, which made many recordings and was a much-in-demand club attraction.

Despite the early classical and jazz success, Coleman decided to build a career in popular music. His first collaborator was Joseph Allen McCarthy, but his most successful early partnership, albeit a turbulent one,[3] was with Carolyn Leigh. The pair wrote many pop hits, including "Witchcraft" and "The Best Is Yet to Come". One of his instrumentals, "Playboy's Theme," became the signature music of the regular syndicated late night TV show Playboy After Dark in the 1960s and specials presented by editor/publisher Hugh M. Hefner of Playboy magazine, and remains synonymous with the Chicago magazine and its creator, Hefner.

Coleman's career as a Broadway composer began when he and Leigh collaborated on Wildcat (1960), which marked the Broadway debut of movie/television comedianne Lucille Ball. The score included the hit tune "Hey, Look Me Over".When Ball became ill, she left the show, and it closed. Next for the two was Little Me, with a book by Neil Simon based on the novel of the same name by Patrick Dennis. The show introduced "Real Live Girl" and "I've Got Your Number," which became popular standards.

In 1964, Coleman met Dorothy Fields at a party, and when he asked if she would like to collaborate with him, she is reported to have answered, "Thank God somebody asked."[4] Fields was revitalized by working with the much younger Coleman, and by the contemporary nature of their first project, which was Sweet Charity, again with a book by Simon, starring Gwen Verdon, and introducing the songs "If My Friends Could See Me Now", "I'm a Brass Band" and "Big Spender". The show was a major success and Coleman found working with Fields much easier than with Leigh. The partnership was to work on two more shows – an aborted project about Eleanor Roosevelt, and Seesaw which reached Broadway in 1973 after a troubled out-of-town tour. Despite mixed reviews, the show enjoyed a healthy run. The partnership was cut short by Fields' death in 1974.

Coleman remained prolific in the late 1970s. He collaborated on I Love My Wife (1977) with Michael Stewart, On The Twentieth Century (1978) with Betty Comden and Adolph Green, and Home Again, Home Again with Barbara Fried, although the latter never reached Broadway. Also in 1970 he produced the single "Lying Here" (Mercury 73150).[5] for the Rock Opera "Sensations", and took a full page (back cover) ad in Billboard magazine to promote his upcoming star vocalist Steve Leeds singing

In 1980, Coleman served as producer and composer for the circus-themed Barnum, which co-starred Jim Dale and Glenn Close. Later in the decade, he collaborated on Welcome to the Club (1988) with A. E. Hotchner, and City of Angels (1989) with David Zippel. In the latter, inspired by the hard-boiled detective film noir of the 1930s and 1940s, he returned to his jazz roots, and the show was a huge critical and commercial success. The 1990s brought more new Coleman musicals to Broadway: The Will Rogers Follies (1991), again with Comden and Green, The Life (1997), a gritty look at pimps, prostitutes, and assorted other lowlife in the big city, with Ira Gasman, and a revised production of Little Me.

Coleman's film scores include Father Goose, The Art of Love, Garbo Talks, Power, and Family Business.[6] In addition, he wrote memorable television specials for Shirley MacLaine, If My Friends Could See Me Now and Gypsy in My Soul.[7] Coleman has been the only composer to win consecutive Tony awards for Best Score at the same time that the corresponding musicals won for Best Musical: City of Angels and Will Rogers' Follies. Coleman was on the ASCAP Board of Directors for many years and also served as their Vice Chairman Writer.[8]

One final musical with a Coleman score played in Los Angeles at the Mark Taper Forum Dec. 2003-Jan. 2004 under the title Like Jazz, as a Broadway tryout. Investor Transamerica Capital went forward with plans to mount a Broadway production renamed In the Pocket.[9] Dirk Decloedt and Maurice Hines were announced as director and choreographer with an anticipated opening in Spring 2006 but it never opened.[10]

Coleman studied at New York's The High School of Music & Art and the New York College of Music, graduating in 1948.[11]

Coleman died of cardiac arrest on November 18, 2004, at New York Hospital; 11:59 pm at the age of 75.[12] He was survived by his wife, Shelby Coleman (née Brown) and their adopted daughter,[13] Lily Cye Coleman (born in 2000). To the very end, he was part of the Broadway scene – he had attended the premiere of Michael Frayn's new play Democracy earlier on November 18.[2]

This article uses material from the article Cy Coleman from the free encyclopedia Wikipedia and it is licensed under the GNU Free Documentation License.