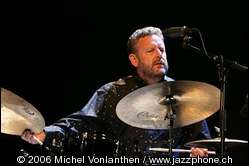 Jeff Hamilton (born August 4, 1953) is an American jazz drummer. He is co-director of the Clayton-Hamilton Jazz Orchestra and leader of his own trio.

Hamilton was born in Richmond, Indiana and attended Indiana University.

He is perhaps best known for his work with Ray Brown, Oscar Peterson, and Diana Krall as well as with the groups he headlines. He has played in jazz festivals and clubs worldwide.

Early in his career, he played with the Tommy Dorsey ghost band, after which he played briefly with Lionel Hampton.

He spent two years as a member of Monty Alexander's Trio starting in 1975, and he was with Woody Herman's Orchestra from 1977 to 1978, following which he became a member of the L.A. Four (with whom he made six record albums). After this, he started recording regularly as a sideman for Concord.

Hamilton is well known for his melodic solos.

From 1983 to 1987, he performed with Ella Fitzgerald, Rosemary Clooney, the Count Basie Orchestra, and Monty Alexander. In the 1990s, Hamilton played gigs with The Clayton Brothers, toured the world with Oscar Peterson and the Ray Brown trio, and currently co-leads the Clayton-Hamilton Jazz Orchestra with John and Jeff Clayton. Hamilton has toured extensively with Diana Krall and played on one of her DVDs and several of her albums. Hamilton also leads his own trio, with Christoph Luty (bass) and Tamir Hendelman (piano); they have recorded for Lake Street and Mons and currently record for Azica. Their latest album, Red Sparkle will be released on February 21, 2012

This article uses material from the article Jeff Hamilton (drummer) from the free encyclopedia Wikipedia and it is licensed under the GNU Free Documentation License.