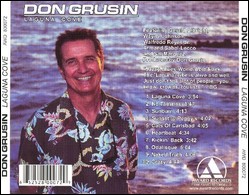 Don Grusin (born April 22, 1941, Denver, Colorado, United States),[1] is an American songwriter, producer and keyboardist. He holds a Masters Degree in Economics from the University of Colorado and, for a period of his life, taught at the National Autonomous University of Mexico, as well as at Foothill College, California, before deciding to enter the music business full-time.[1]

He is the younger brother of Dave Grusin.[1]

This article uses material from the article Don Grusin from the free encyclopedia Wikipedia and it is licensed under the GNU Free Documentation License.