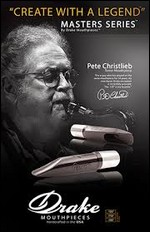 Christlieb played the legendary sax solos on Steely Dan's song Deacon Blues from the album Aja, Natalie Cole's Unforgettable, and the extended tenor sax solo on the song FM from the movie of the same name.

Christlieb currently plays with his recently formed 10-piece group, "Tall and Small Band;" the Bill Holman Orchestra; and his own quartet. Also, for years Pete has been involved in racing Dragsters, with his cars participating in numerous races in the Southwest and across the country. His team has won two national championships for Blown Alcohol Dragsters.

Christlieb plays his own signature series model of saxophone made by Cannonball Musical Instruments.

This article uses material from the article Pete Christlieb from the free encyclopedia Wikipedia and it is licensed under the GNU Free Documentation License.