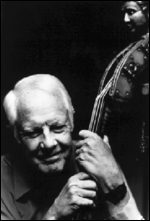 Robert Sherwood Haggart (March 13, 1914 – December 2, 1998) was a dixieland jazz double bass player, composer, and arranger. Although he is associated with dixieland, he was one of the finest rhythm bassists of the Swing Era.

In 1935, Haggart became a member of the Bob Crosby Band. He arranged and composed "Big Noise from Winnetka", "My Inspiration", "What's New?", and "South Rampart Street Parade". He remained with the band until it dissolved in 1942, then began working as session musician, with much of his time spent at Decca Records.[1] He recorded with Billie Holiday, Duke Ellington, Benny Goodman, and Ella Fitzgerald; his arrangements can be heard on Fitzgerald's album Lullabies of Birdland.

He and Yank Lawson formed the Lawson-Haggart Band, and they also led the World's Greatest Jazz Band from 1968–1978. He appeared at jazz festivals until his death on December 2, 1998 in Venice, Florida.[1][2]

This article uses material from the article Bob Haggart from the free encyclopedia Wikipedia and it is licensed under the GNU Free Documentation License.