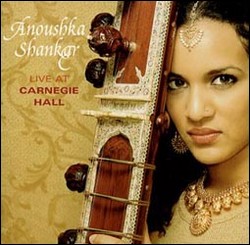 Anoushka Shankar was born in London into a Bengali Hindu family, and her childhood was divided between London and Delhi. She is a daughter of Indian sitar player Ravi Shankar and Sukanya Shankar. She is also the paternal half-sister of American singer Norah Jones, and Shubhendra "Shubho" Shankar, who died in 1992.[1]

As a teenager, she lived in Encinitas, California and attended San Dieguito Academy. A 1999 honors graduate, Shankar then decided to pursue a career in music rather than attend college.[1]

Anoushka Shankar began training on the sitar with her father as a child, with practice consisting of just a couple of sessions a week at the age of ten. Shankar gave her first public performance at the age of 13 at Siri Fort in New Delhi. By the age of fourteen, she was accompanying her father at concerts around the world, and signed her first record contract, with Angel Records (EMI) at 16.

She released her first album, Anoushka, in 1998, followed by Anourag in 2000. Both Shankar and Norah Jones were nominated for Grammy awards in 2003 when Anoushka became the youngest-ever and first woman nominee in the World Music category for her third album, Live at Carnegie Hall.

2005 brought the release of her fourth album RISE, earning her another Grammy nomination in the Best Contemporary World Music category. In February 2006 she became the first Indian to play at the Grammy Awards.

Shankar, in collaboration with Karsh Kale, released Breathing Under Water on 28 August 2007. It is a mix of classical sitar and electronica beats and melodies. Notable guest vocals included her paternal half-sister Norah Jones, Sting, and her father, who performed a sitar duet with her.

Shankar has made many guest appearances on recordings by other artists, among them Sting, Lenny Kravitz and Thievery Corporation. Duetting with violinist Joshua Bell, in a sitar-cello duet with Mstislav Rostropovich, and with flautist Jean-Pierre Rampal, playing both sitar and piano. Most recently Shankar has collaborated with Herbie Hancock on his latest record The Imagine Project.

Shankar has given soloist performances of her father's 1st Concerto for Sitar and Orchestra worldwide. In January 2009 she was the sitar soloist alongside the Orpheus Chamber Orchestra for the series of concerts premièring her fathers 3rd Concerto for Sitar and Orchestra, and in July 2010 she premiered Ravi Shankar's first symphony for sitar and orchestra with the London Philharmonic Orchestra at London's Barbican Hall.

Shankar has also ventured into acting (Dance Like a Man, (2004)) and writing. She wrote a biography of her father, Bapi: The Love of My Life, in 2002 and has contributed chapters to various books. As a columnist she wrote monthly columns for India's First City Magazine for three years, and spent one year as a weekly columnist for India's largest newspaper, the Hindustan Times.

Shankar recorded her following album in Madrid, Spain. Released in autumn 2011, Traveller is an exploration of the commonalities and differences between classical Indian music and Spanish flamenco, and features Shubha Mudgal, Tanmoy Bose, Pepe Habichuela, Sandra Carrasco and Duquende among others.[2]

On 29 November 2002, Anoushka Shankar was the opening act at the Concert for George, a posthumous tribute to the life and music of George Harrison, held at the Royal Albert Hall in London. She was the principal performer in the entire first set or "Indian portion" of the concert. She opened the show by playing a solo sitar instrumental titled "Your Eyes". Also on the sitar, she performed George Harrison's "The Inner Light" with Jeff Lynne (vocals and guitar). Lastly, she conducted a new composition, Arpan, written by her father. The composition featured Eric Clapton playing acoustic guitar. The concert was modelled after Ravi Shankar's benefit concert with Harrison, the 1971 Concert for Bangladesh.

Anoushka Shankar was invited by Richard Gere and Philip Glass to perform in a concert at the Avery Fisher Hall in 2003 in aid of the Healing the Divide: A Concert for Peace and Reconciliation. Shankar and Jethro Tull postponed a concert scheduled for 29 November 2008 in Mumbai after the 2008 Mumbai attacks. They reorganised the performance as A Billion Hands Concert, a benefit performance for victims of the attacks, and held it on 5 December 2008. Shankar commented on this decision stating that: "As a musician, this is how I speak, how I express the anger within me [...] our entire tour has been changed by these events and even though the structure of the concert may remain the same, emotionally perhaps we are saying a lot more."[3]

Shankar is a supporter of animal rights and People for the Ethical Treatment of Animals (PETA). She and her father appeared in a thirty-second public-service announcement against animal suffering.[6] Anoushka is also the spokesperson for the United Nations World Food Programme in India.

Anoushka Shankar, has thrown her weight behind an online campaign on Change.org,[7] demanding an end to crime against women in the wake of the Delhi gang rape. The campaign invites one billion women and those who love them to walk out, "Dance, rise up, and demand" an end to this violence. As part of the campaign, she released a video in which she revealed she had been sexually abused by a family friend.[8]

Shankar lives between the United States, the United Kingdom, and India. She is married to British director Joe Wright[9] and their first child, Zubin Shankar Wright, was born on 22 February 2011.[10]

This article uses material from the article Anoushka Shankar from the free encyclopedia Wikipedia and it is licensed under the GNU Free Documentation License.