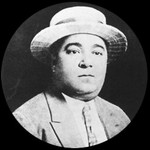 Jimmie Noone (April 23, 1895 – April 19, 1944) was an American jazz clarinetist and bandleader. After beginning his career in New Orleans he led Jimmie Noone's Apex Club Orchestra, an influential Chicago band that recorded for Vocalion and Decca Records. Maurice Ravel acknowledged basing his Boléro on a Jimmie Noone improvisation. At the time of his death Noone had his own quartet in Los Angeles and was part of an all-star band that was an important force in reviving interest in traditional New Orleans jazz in the 1940s.

Jimmie Noone was born on April 23, 1895, on a farm in Cut Off, Louisiana, to Lucinda (née Daggs)[1] and James Noone. He grew up in Hammond, Louisiana, where he started playing guitar. In 1910, Noone's family moved to New Orleans. Noone switched to the clarinet and studied with Lorenzo Tio and the young Sidney Bechet.

In 1913 Noone was playing professionally with Freddie Keppard in Storyville, replacing Bechet. In 1916, when Keppard went on tour, Noone and Buddie Petit formed the Young Olympia Band, and Noone also led a small ensemble (clarinet, piano and drums) unusual for its time.[2]:145–146

In 1917, Noone played with Kid Ory and Oscar Celestin until the Storyville district was permanently closed.[3]:93 He rejoined Keppard and the Original Creole Orchestra on the vaudeville circuit until the group broke up the following year.

In 1918, Noone moved to Chicago, Illinois, where he studied with symphony clarinetist Franz Schoepp.[4]:352 He played for two years (1918–1920) at Chicago's Royal Garden Cafe with Paul Barbarin (drums), King Oliver, Bill Johnson (bass), Lottie Taylor (piano) and Eddie Vinson (trombone). In 1920 Noone joined Keppard in Doc Cook's dance orchestra, in which he played saxophone and clarinet for six years.[2]:146 Noone was a brother-in-law of both Barbarin and Keppard.[3]:93

In 1926, Noone started leading the band at the Apex Club at 330 E. 35th Street,[5] one of a wealth of Jazz Age clubs on Chicago's South Side.[6] Jimmie Noone's Apex Club Orchestra was notable for its unusual instrumentation—a front line consisting of clarinet and alto saxophone (Joe Poston, who worked with Noone in Doc Cook's band),[2]:146–147 with piano (Earl Hines), drums (Ollie Powers, succeeded by Johnny Wells in 1928) and guitar (Bud Scott).[7]

Noone signed with Brunswick Records in May 1928 and was assigned to their Vocalion label. The first session yielded "Four or Five Times" backed with "Every Evening (I Miss You)" (Vocalion 1185), which was a best seller.

"The quintet which Noone brought to Vocalion was unique in that it preserved New Orleans' musical concepts without using brass instruments," wrote jazz historian Richard Hadlock in his notes to Decca's 1994 remastered reissue of the 1928–1929 Apex Club Orchestra recordings. "Joe Poston and Noone took turns playing a loose, melodic lead and the powerful right hand of Hines was often blended into the front line to plump up the harmony. … Noone seemed to keep one foot in traditional New Orleans bandsmanship and the other in the new movement toward virtuoso swing solo playing."[7]

Noone's artistry is credited with inspiring Maurice Ravel's famed 1928 composition, Boléro.[8] Benny Goodman, still wearing short pants, was among the teenage musicians often seen at the Apex Club. "He absorbed in his own playing the beautiful tone and sparkling flow of Jimmie Noone", wrote New York Times music critic John S. Wilson.[9] Not yet ten years old, Nat King Cole listened to Noone's band on the radio, and he would sneak out his window to sit in the alley outside the nightclub and listen to Noone and Hines. Some ten years later, when a customer badgered Cole to sing along with his instrumental trio, the first song he sang was "Sweet Lorraine", Noone's theme song.[10]:8, 33

Noone remained in Chicago, working at the Apex Club until it was raided and shut down in 1929[7] and then working at various Chicago clubs throughout the next decade. He recorded with Doc Cook's band as well as his own. In 1931 Noone left Chicago for a month at the Savoy Ballroom, and in 1935 he briefly moved to New York City to start a band and a (short-lived) club with Wellman Braud. He made long tours around the country, including performances in New Orleans.[2]:146

Noone remained with Brunswick through 1935 (mostly on Vocalion, but also had a number of records issued on Brunswick) and then signed with Decca in early 1936 and one session each for Decca in 1936, 1937 and 1940. He did one session for Bluebird also in 1940.

With the swing music craze dominating jazz, Noone tried leading a big band—singer Joe Williams made his professional debut in 1937 with the group[11]—but he went back to his small-ensemble format.[7]

In 1943 Noone moved to Los Angeles, California, where a traditional New Orleans-style jazz revival was under way. He began to enjoy renewed popularity that year when the Brunswick Collectors Series reissued his 1928 Vocalion recordings in a Decca album set (B-1006) titled Jimmie Noone, Dean of Modern Hot Clarinetists – Apex Club, Chicago 1928, Volume 1.[12]

Arriving in Los Angeles, Noone was confronted with a massive housing shortage due to the population boom associated with the war industry. On September 14, 1943, Ted LeBerthon of The Los Angeles Daily News wrote a column pleading for someone to rent or sell a home to the celebrated musician:

I noted that Benny Goodman, Artie Shaw or Woody Herman, three outstanding white jazz clarinetists and band leaders, wouid have found a home because, being white, they did not have to confine their search to a limited restricted area. Also, I pointed out, they made far bigger money because of being white, and could afford to pay a far higher rental. The situation, I observed, was cruelly ironic. For Hugues Panassié, the distinguished French music critic, in his book The Real Jazz, had acclaimed Jimmie Noone as the greatest clarinetist of all time, the possessor of a more beautiful, more poignant tone and a player able to summon more sensitive nuances than any other. The late Maurice Ravel, who acknowledged basing his Boléro on a Jimmie Noone improvisation, had publicly dared any symphonic clarinetist to perform Jimmie’s technical feats. But in Los Angeles there was no place for Jimmie and his lovely wife, Rita …[13]

The column brought about LeBerthon's dismissal after seven years with the Daily News.[13]

Noone's wife (born Rita Mary Mathieu, 1912–1980)[1] and their three children[14] had to move back to Chicago while Noone continued to look for a place for them to live. In addition to it being a burdensome expense for the musician, LeBurthon later reported that the stress on Noone aggravated a cardiac ailment that had emerged during the Depression years. By February 1944, however, Noone was able to find a home in Los Angeles for his family and after some delays they were reunited.[13]

On March 15, 1944, Noone made his first appearance with an all-star band featured on CBS Radio's The Orson Welles Almanac—a band that was an important force in reviving interest in New Orleans jazz. A passionate and knowledgeable fan of traditional jazz, Orson Welles asked Marili Morden of Hollywood's Jazz Man Record Shop to put together an authentic jazz band for his radio show. Within minutes she assembled Mutt Carey (trumpet), Ed Garland (bass), Kid Ory (trombone), Bud Scott (guitar), Zutty Singleton (drums), Buster Wilson (piano), and Jimmie Noone (clarinet). Other than Singleton, Noone was the only band member who was working regularly, performing with his own quartet at the Streets of Paris[15]:6 in Hollywood. Their performances on the Welles show were so popular that the band became a regular feature and launched Ory's comeback.[16]:85

Noone performed on four broadcasts of The Orson Welles Almanac.[17][18][19] On the morning of the fifth broadcast, April 19, 1944, Noone suddenly died at home of a heart attack, aged 48.[13] Welles telephoned Kid Ory and told him of Noone's death, and asked him to write a blues that could be performed for that evening's radio program. "See if you can work one up," Welles said. "We'll call it 'Blues for Jimmie'."[20]

In 1952 Ory reflected on writing the tune, which by then was regarded a classic. "I got up right away and began blowing some blues on my horn. I was real sad; Jimmie was my best friend," Ory said. "I found a man to fill in for Jimmie on clarinet. Then I got the band together that afternoon and we rehearsed the tune. On the show that night Mr. Welles explained the situation over the air. I don't mind saying that when we played 'Blues for Jimmie' all the musicians in the band were crying. So was Mr. Welles, and the audience, too."[20]

On the program that evening, Welles spoke extemporaneously for three minutes about Noone while Buster Wilson and Bud Scott, a member of Jimmie Noone's Apex Club Orchestra, played "Sweet Lorraine" in the background. "That was his theme, remember?" Welles said.[21] As he did every time the All Star Jazz Group appeared, Welles introduced each musician by name, and that night he introduced New Orleans-born clarinetist Wade Whaley, sitting in for Noone.[22]:370–371[23]:9–10

"Blues for Jimmie" became a regular feature for Kid Ory's Creole Jazz Band, and they recorded it for Crescent Records in August 1944.

Until a few nights before his death Noone continued to perform with own quartet. He signed with Capitol Records in March 1944[24] and his last recordings were made for Capitol's New American Jazz album (Capitol A-3, August 1944),[25][26] produced by Dave Dexter, Jr. Dexter called Noone "a gracious, personable and musicianly artist—one whose devotion to the early New Orleans style of playing was ever apparent—and with his passing the profession lost another of its pioneers."[27]:132

Noone was buried at Evergreen Cemetery, Los Angeles.[28]

In August 1944 the Musicians Congress sponsored a memorial concert at the Trocadero in Noone's honor, and for the benefit of his family. Featured artists included the All Star Jazz Group, Calvin Jackson, Wingy Manone, Johnny Mercer, the Nicholas Brothers, Earl Robinson, Rex Stewart, Joe Sullivan and Dooley Wilson. Albert Dekker was master of ceremonies.[29]

Noone is generally regarded as one of the greatest of the second generation of jazz clarinetists, along with Johnny Dodds and Sidney Bechet. Noone's playing is not as blues-tinged as Dodds nor as flamboyant as Bechet, but is perhaps more lyrical and sophisticated, and certainly makes more use of "sweet" flavoring. Noone was an important influence on later clarinetists such as Artie Shaw, Irving Fazola and Benny Goodman.

Jimmie Noone and His Orchestra make a brief appearance in the East Side Kids feature film, Block Busters (1944),[32] released three months after Noone's death. The quartet performs excerpts of "Apex Blues" and "Boogie Woogie".[33]

Noone's discography concluded with recordings of his performances on The Orson Welles Almanac in March and April 1944. Several albums collect all of the live performances (also available on the Internet Archive[18][19]), and a few collect most of Welles's introductions of the band, including his eulogy for Jimmie Noone.[23]

Nesuhi Ertegun founded Crescent Records—the first record label he created—with the express purpose of recording the All Star Jazz Band featured on The Orson Welles Almanac. Jimmie Noone died before any recording had begun. With the exception of Zutty Singleton, who had other commitments, the rest of the group stayed together and was renamed Kid Ory's Creole Jazz Band by Ertegun. The second disc released by Crescent Records features "Blues for Jimmie", recorded in August 1944.[34]

This article uses material from the article Jimmie Noone from the free encyclopedia Wikipedia and it is licensed under the GNU Free Documentation License.

Antonin Dvorak Prager Walzer
Update Required To play the media you will need to either update your browser to a recent version or update your Flash plugin.