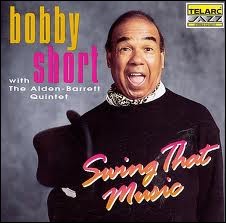 Robert Waltrip "Bobby" Short (September 15, 1924 – March 21, 2005) was an American cabaret singer and pianist, best known for his interpretations of songs by popular composers of the first half of the 20th century such as Rodgers and Hart, Cole Porter, Jerome Kern, Harold Arlen, Vernon Duke, Noël Coward and George and Ira Gershwin.

He also championed African-American composers of the same period such as Eubie Blake, James P. Johnson, Andy Razaf, Fats Waller, Duke Ellington and Billy Strayhorn, presenting their work not in a polemical way, but as simply the obvious equal of that of their white contemporaries.

His dedication to his great love what he called the "Great American Song" left him equally adept at performing the witty lyrics of Bessie Smith's "Gimme a Pigfoot (And a Bottle of Beer)" or Gershwin and Duke's "I Can't Get Started." Short stated his favorite songwriters were Ellington, Arlen and Kern, and he was instrumental in spearheading the construction of the Ellington Memorial in New York City.

He was born in Danville, Illinois, United States, where one of his school classmates was Dick Van Dyke.[1] He began performing as a busker after leaving home at the age of eleven for Chicago, with his mother's permission.

He started working in clubs in the 1940s. In 1968 he was offered a two-week stint at the Café Carlyle in New York City, to fill in for George Feyer. Short (accompanied by Beverly Peer on bass and Dick Sheridan on drums) became an institution at the Carlyle, as Feyer had been before him, and remained there as a featured performer for over 35 years. There, a combination of traits his seemingly effortless elegance; his vocal phrasing (perfected, as was that of Frank Sinatra, at the feet of Miss Mabel Mercer, with perhaps also some help from Ethel Waters); his talent for presenting unknown songs worth knowing while keeping well known songs fresh; his infectious good cheer; and his resolute, self-disciplined professionalism earned him great respect and made him tremendously popular. Bobby Short was generous with his impromptu all-night performances at his various favorite cafes and restaurants. He was a regular patron at Ted Hook's Backstage, located at Eighth Avenue and Forty-Fifth Street.

This article uses material from the article Bobby Short from the free encyclopedia Wikipedia and it is licensed under the GNU Free Documentation License.