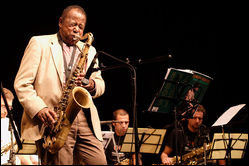 After graduating from Kingston High School in 1951, Jeffrey completed a Bachelor of Science degree in music education at Ithaca College in 1955. He spent the late 1950s touring with bands led by Illinois Jacquet, Elmo Hope, Big Maybelle, and Wynonie Harris. From 1960 to 1961, Jeffrey toured the US with B.B. King, after which he worked as a freelance musician in the New York City area and toured with bands led by Howard McGhee, Clark Terry, and Dizzy Gillespie.[1]

1968 marked Jeffreys first studio work as a leader, when he recorded the album Electrifying Sounds through Savoy Records (Savoy 12192). He then toured with the Count Basie Orchestra before beginning his associations with Thelonious Monk and Charles Mingus. Jeffrey first joined Monks quartet for a multi-day run at the Frog & Nightgown club in Raleigh, North Carolina, in May 1970.[2] He then performed as a regular member of Monks band throughout the remainder of Monks public performance career, appearing with Monk throughout the US and Japan at the Village Vanguard, Lincoln Centers Philharmonic Hall, the Jazz Workshop, the Manne-Hole, the Cellar Door, and many other venues. Jeffrey was hired by George Wein to organize a 15-piece band for a tribute concert to Monk at Carnegie Hall in 1974; a concert at which Monk made a surprise appearance, replacing Barry Harris on the piano just as the concert was starting.[3]

Jeffrey also enjoyed a lasting association with Charles Mingus throughout the 1970s. He first performed as a member of Minguss big band at the Newport Jazz Festival in 1972, and he continued performing, arranging, and recording with Mingus through 1979, the year Mingus died. In 1973 and 1974 Jeffrey made three additional studio recordings as leader on the Mainstream Records label.

Jeffrey also enjoyed a prolific teaching career, first working as a saxophone instructor at Columbia University in 1973. He also held positions in arranging and jazz history at Jersey City State College (1974), as jazz ensemble director at the University of Hartford (1975-1983), and as an assistant professor of jazz at Livingston College of Rutgers University (1978-1983).

In 1983 Jeffrey accepted a position as artist in residence and director of jazz studies at Duke University; a position he held until his retirement in 2003. At Duke, Jeffrey taught courses on jazz history and arranging while also directing the Duke Jazz Ensemble. He also organized the NC/Umbria Jazz Festival and the Mary Lou Williams Jazz Festival while serving on the NC Council of the Arts and the Durham Arts Council. He currently resides in Durham, NC, where he is Professor of the Practice Emeritus in Duke University's Department of Music.

In 2009, Jeffrey recorded a tribute to Thelonious Monk with the French label Imago Records distributed by Orkhestra, with Alessandro Collina on piano, Sebastien Adnot on bass and Laurent Sarrien on drums.

This article uses material from the article Paul Jeffrey from the free encyclopedia Wikipedia and it is licensed under the GNU Free Documentation License.

Joseph Haydn Andante grazioso aus dem Streichquartett Es-Dur
Update Required To play the media you will need to either update your browser to a recent version or update your Flash plugin.