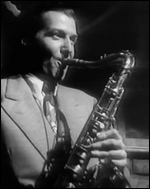 His major recordings were "Skyliner", "Cherokee", "The Wrong Idea", "Scotch and Soda", "In a Mizz", and "Southland Shuffle".

Barnet was born in New York City.[1] His parents divorced when he was two, and he was raised by his mother and her grandparents. His grandfather was Charles Frederick Daly, a vice-president for the New York Central Railroad, banker, and businessman.[2]

Barnet attended various boarding schools, both in the New York and Chicago areas. He learned to play piano and saxophone as a child. He often left school to listen to music and to try to gain work as a musician.[2]:7-10 Although his family wanted him to become a lawyer, he chose to be a musician instead.[3]

By sixteen, Barnet had done road work with a Jean Goldkette satellite band and was in New York, where he joined Frank Winegar's Pennsylvania Boys on tenor sax. Always restless, by 1931 he had relocated to Hollywood and appeared as a film extra while trying to interest local bandleaders in hot music, which was increasingly unpopular due to the Great Depression. Late in 1932, he returned east and persuaded a contact at CBS' artist bureau to try him out as an orchestra leader. He was 18 years old.

Barnet began recording in October 1933, during an engagement at New York's Park Central Hotel, but was not a great success for most of the 1930s, regularly breaking up his band and changing its style. Early in 1935 he attempted to premiere swing music at New Orleans' Hotel Roosevelt, where Louisiana's colorful Governor Huey Long, disliking the new sound, had the band run out of town by luring them to a bordello, which was then raided. Barnet arranged with Joe Haymes to take several of his now-jobless sidemen, while he himself went on a lark in Havana, as an escort to well-to-do older women. 1936 saw another swinging Barnet edition, which featured the up-and-coming vocal quartet The Modernaires but quickly faded from the scene.

The height of Barnet's popularity—and his first truly permanent band—came between 1939 and 1941, a period that began with his hit version of "Cherokee", written by Ray Noble and arranged by Billy May. In 1944, Barnet had another big hit with "Skyliner". In 1947, he started to switch from swing music to bebop. During his swing period his band included Buddy DeFranco, Roy Eldridge, Neal Hefti, Lena Horne, Barney Kessel, Dodo Marmorosa, Oscar Pettiford, and Art House, while later versions of the band included Maynard Ferguson, Doc Severinsen, Jimmy Knepper and Clark Terry. Trumpeter Billy May was an arranger in the Charlie Barnet Orchestra before joining Glenn Miller in 1940.

He was one of the first bandleaders to integrate his band; the year is variously given as 1935 or 1937. He was an outspoken admirer of Count Basie and Duke Ellington. Ellington recorded the Charlie Barnet composition "In a Mizz". In 1939, Basie lent Barnet his charts after Barnets' had been destroyed in a fire at the Palomar Ballroom in Los Angeles. Throughout his career he was an opponent of syrupy arrangements. In the song "The Wrong Idea", he lampooned the "sweet" big band sound of the era. The song was written by Billy May, who later used the same satirical bent in his collaborations with Stan Freberg on Capitol Records including the Lawrence Welk satire "Wunnerful! Wunnerful!" Barnet's was a notorious party band where drinking and vandalism were not uncommon. While Glenn Miller enforced strict standards of dress and deportment, Barnet was more interested in having fun, according to his autobiography The Swinging Years.

In 1949 he retired, apparently because he had lost interest in music. He was able to retire when he chose because he was one of the few heirs in a very wealthy family. He occasionally returned from retirement for brief tours but never returned to music full-time.

Known for a unique sound and hard-swinging style on tenor saxophone, Barnet in the late 1930s added the alto saxophone to his arsenal, followed by the soprano saxophone, an instrument that had fallen out of favor after the 1920s and was not generally used in the big band era.

In September 1964, Barnet arranged a private party for his musical hero, Duke Ellington, and orchestra to play at Palm Springs' San Jacinto country club. At the door, a small sign painted by Barnet said: "Any complaints about loud music or requests for excessive use of mutes will be grounds for instant expulsion (to a table in the parking lot). Any requests for folk music, twist, watusi, or rock and roll will result in instant execution by golf balls at 20 paces."[4] Barnet did not play at the gathering.

Barnet was married eleven times and in his 1984 autobiography says, "I went through several more marital fiascos, but they were mostly Mexican marriages and quickly annulled, because they weren't legal in the first place."[2]:153 His final marriage to Betty Thompson was for 33 years. He had one son, Charles D. Barnet, Jr, from an earlier marriage. During retirement, Barnet resided at homes in Palm Springs and San Diego, California. He kept a 46-foot boat in San Diego.

Barnet died from complications of Alzheimer's disease and pneumonia at San Diego's Hillside hospital, on September 4, 1991.[4][6]

Charlie Barnet's compositions included "Skyliner", "Southland Shuffle", "Swing Street Strut", "The Right Idea", "The Wrong Idea" with Billy May, "Growlin'", "Scotch and Soda", "Midweek Function", "Oh What You Said (Are We Burnt Up?)", "I Kinda Like You", "Tappin' at the Tappa", "The Last Jump", "Knocking at the Famous Door", "Lazy Bug" with Juan Tizol, "Ogoun Badagris (Voodoo War God)", and "In a Mizz", which was recorded by Duke Ellington.

"Skyliner", arranged by Billy May, was written as the theme music for the late 1940s US Armed Forces Network program "Midnight In Munich",[7] broadcast from the AFN station in Munich, Germany, and hosted by Sgt. Ralph Moffat. Thanks to the station's immensely powerful twin 100 kW transmitters, AFN Munich could be heard as far away as the UK; this, and the popularity of Moffat's show, evidently helped "Skyliner" and many other contemporary American swing hits to gain wide popularity across Europe and become hits in the UK.[8] The title (which was originally printed as "Sky Liner") may be a reference to the practice of American pilots flying into Munich, who used the radio station's powerful signal to home in on the city.[9]

This article uses material from the article Charlie Barnet from the free encyclopedia Wikipedia and it is licensed under the GNU Free Documentation License.

Felix Mendelssohn-Bartholdy Streichersinfonie Nr.7 d-moll
Update Required To play the media you will need to either update your browser to a recent version or update your Flash plugin.