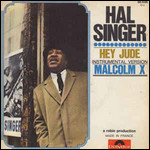 Singer was born in Tulsa, Oklahoma's African-American district, Greenwood. He grew up in Greenwood where he studied violin as a child but, as a teenager, switched to clarinet and then tenor saxophone, which became his instrument of choice. From the late 1930s he began playing in local bands, including Ernie Fields', before joining Jay McShann's orchestra in 1943 and then moving to New York. After working in other bands, he joined Oran "Hot Lips" Page's band in 1947 and began working as a session musician with King Records.

In early 1948, he left Page, formed his own small group, and was signed to Mercury Records where he cut his first single "Fine As Wine" with a B side "Rock Around the Clock" (not the same title made famous by Bill Haley), co-written with Sam Theard.[2] For the Savoy label of Newark, New Jersey, he recorded the instrumental "Corn Bread", which made No. 1 on the R&B charts in September 1948, and gave Singer a new popularity and nickname. His follow-up the following year, "Beef Stew", was a much smaller hit.

In the early and mid-1950s, he recorded with Mercury, toured with R&B artists such as The Orioles and Charles Brown, and increasingly worked as a session musician. In 1958, he began recording with Prestige Records as a jazz soloist and performing at the Metropole Cafe in New York with leading jazz musicians such as Roy Eldridge and Coleman Hawkins.

In 1965, after touring Europe with Earl "Fatha" Hines' band, Singer stayed in France to settle near Paris. He continued to record and also toured extensively around Europe and Africa, performing with various bands including Charlie Watts' and the Duke Ellington Orchestra. His 1969 album, Paris Soul Food, featuring Singer on saxophone and singing; Robin Hemingway, vocals, arrangements and album production; and Manu Dibango, saxophone, organ and arrangements won a French Record Academy award for best international LP in 1969.

In 1974, he went on a State Department tour of Africa with Horace Parlan.[3]

Singer appears on the 1981 live recording Rocket 88 with the UK-based boogie-woogie band Rocket 88. Also in the summer of 1981 Singer visited London, where he recorded two albums for John Stedman's record label, JSP. The first album, Swing on it (JSP 1028), was recorded with British musicians, including Jim Mullen, Peter King, Mike Carr and Harold Smith, while the second, recorded a day later with the same group, also featured Jimmy Witherspoon ("Big Blues", JSP 1032).

Singer shares artist billing on a recording made in 1989, along with Al Copley, "Royal Blue", released on the Black Top label in 1990.

He appeared as an actor in the award-winning 1990 feature film Taxi Blues and, in 1992, was awarded the prestigious title of "Chevalier des Arts" by the French government.

A documentary film, Hal Singer, Keep the Music Going, was made by Haitian-American director Guetty Felin in 1999. It was made in collaboration with the CNC in France and the French cable music network Muzzik. The documentary wove into the narrative Singer's personal super-8 movies, archival images of the jazz era, and footage of Singer's home in Paris, in concert and teaching jazz to the younger generation of musicians in France. Spoken word poet Jessica Care Moore is featured in a duet with Singer. This documentary is the only film on Singer's career to date.

This article uses material from the article Hal Singer from the free encyclopedia Wikipedia and it is licensed under the GNU Free Documentation License.