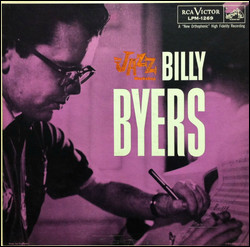 Born in Los Angeles, Byers suffered from arthritis from a young age and was unable to continue his plans of a career as a pianist. He picked up trombone and played with Karl Kiffle before serving in the Army in 1944-45. In the second half of the 1940s he arranged and played trombone for Georgie Auld, Buddy Rich, Benny Goodman, Charlie Ventura, and Teddy Powell. Following this he composed for WMGM (AM) radio and television in New York City. In the middle of the 1950s he was in Paris arranging for Ray Ventura; he also led a session of his own at this time. Later in the 1950s in Europe he played with Harold Arlen (1959–1960) and with the orchestra of Quincy Jones. He became Jones's assistant at Mercury Records in the 1960s, and arranged for Count Basie and Dan Terry's 1969 album Lonely Place. He also played trombone on Frank Zappa's Waka/Jawaka and recorded some Duke Ellington standards on his own. He toured Europe and Japan alongside Frank Sinatra in 1974. Byers had extensive credits arranging and conducting for film, and won the Drama Desk Award for Outstanding Orchestrations for City of Angels.

This article uses material from the article Billy Byers from the free encyclopedia Wikipedia and it is licensed under the GNU Free Documentation License.