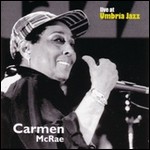 Carmen Mercedes McRae (April 8, 1922 – November 10, 1994) was an American jazz singer. She is considered one of the most influential jazz vocalists of the 20th century and is remembered for her behind-the-beat phrasing and ironic interpretation of lyrics.[1] McRae was inspired by Billie Holiday, but she established her own voice. She recorded over sixty albums and performed worldwide.

McRae was born in Harlem. Her father, Osmond, was originally from Costa Rica, and her mother, Evadne McRae, an immigrant from Jamaica. She began studying piano when she was eight, and the music of jazz greats such as Louis Armstrong and Duke Ellington filled her home. When she was just 17 years old she met singer Billie Holiday. As a teenager McRae came to the attention of Teddy Wilson and his wife, the composer Irene Kitchings. One of McRae's early songs, "Dream of Life", was, through their influence, recorded in 1939 by Wilson’s long-time collaborator Billie Holiday.[2][3] McRae considered Holiday to be her primary influence.[4] She was a lifelong active Democrat.[5]

In her late teens and early twenties, McRae played piano at a New York City club called Minton's Playhouse, Harlem's most famous jazz club, sang as a chorus girl, and worked as a secretary. It was at Minton's where she met trumpeter Dizzy Gillespie, bassist Oscar Pettiford, and drummer Kenny Clarke, had her first important job as a pianist with Benny Carter's big band (1944), worked with Count Basie (1944) and under the name "Carmen Clarke" (having married Kenny Clarke)[3] made her first recording as pianist with the Mercer Ellington Band (1946–47). But it was while working in Brooklyn that she came to the attention of Decca’s Milt Gabler. Her five-year association with Decca yielded 12 LPs.

In 1948 she moved to Chicago with comedian and impressionist George Kirby, with whom she had fallen in love. At the end of the relationship, she worked as a pianist and singer at the Archway Lounge. She played piano steadily for almost four years at a number of clubs in Chicago before returning to New York in 1952. In Chicago she developed her own specific style. Those years in Chicago, McRae told Jazz Forum, "gave me whatever it is that I have now. That's the most prominent schooling I ever had."[6]

Back in New York in the early 1950s, McRae got the record contract that launched her career. She was voted best new female vocalist of 1954 by DownBeat magazine. MacRae married twice: to drummer Kenny Clarke from 1944 to 1956, though they separated in 1948; , and to bassist Ike Isaacs in the late 1950s. Both marriages ended in divorce.[7][8]

Among her most interesting recording projects were Mad About The Man (1957) with composer Noël Coward, Boy Meets Girl (1957) with Sammy Davis, Jr., participating in Dave Brubeck's The Real Ambassadors (1961) with Louis Armstrong, a tribute album You're Lookin' at Me (A Collection of Nat King Cole Songs) (1983), cutting an album of live duets with Betty Carter, The Carmen McRae-Betty Carter Duets (1987), being accompanied by Dave Brubeck and George Shearing, and closing her career with brilliant tributes to Thelonious Monk, Carmen Sings Monk (1990), and Sarah Vaughan, Sarah: Dedicated to You (1991).

As a result of her early friendship with Billie Holiday, she never performed without singing at least one song associated with "Lady Day", and she recorded an album in 1983 in her honor entitled For Lady Day, which was released in 1995, with songs including "Good Morning Heartache", "Them There Eyes", "Lover Man", "God Bless the Child" and "Don't Explain". McRae also recorded with some of the world's best jazz musicians in albums such as Take Five Live (1961) with Dave Brubeck, Two for the Road (1980) with George Shearing, and Heat Wave (1982) with Cal Tjader. The latter two albums were part of a notable eight-year relationship with Concord Jazz.[9]

McRae sang in jazz clubs throughout the United States — and across the world — for more than fifty years. She was a popular performer at the legendary Monterey Jazz Festival (1961–63, 1966, 1971, 1973, 1982), performing with Duke Ellington's orchestra at the North Sea Jazz Festival in 1980, singing "Don't Get Around Much Anymore", and at the Montreux Jazz Festival in 1989.[10] She left New York for Southern California in the late 1960s, but appeared in New York regularly, usually at the Blue Note, where she performed two engagements a year through most of the 1980s. In May–June 1988, she collaborated with Harry Connick Jr. on the song "Please Don't Talk About Me When I'm Gone" (S. Clare & S. Stept) in New York City at the RCA Studios, for Connick's debut album, 20.[8] She withdrew from public performance in May 1991 after an episode of respiratory failure only hours after she completed an engagement at the Blue Note jazz club in New York.

On November 10, 1994, McRae died at her home in Beverly Hills, California, at the age of 72. She had fallen into a semi-coma four days earlier, a month after being hospitalized for a stroke.

This article uses material from the article Carmen McRae from the free encyclopedia Wikipedia and it is licensed under the GNU Free Documentation License.