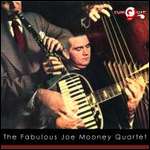 Mooney was born in Paterson, New Jersey, United States.[1] Mooney went blind around age ten. He and his brother Dan, played together on radio broadcasts in the late 1920s, and recorded between 1929 and 1931 as the Sunshine Boys and the Melotone Boys;[1] both sang while Joe accompanied on piano. They continued performing together on WLW in Cincinnati until 1936, after which time Dan Mooney left the music industry.

In 1937 Mooney started work as a pianist and arranger for Frank Dailey, a role he reprised with Buddy Rogers in 1938. Through the early 1940s he arranged for Paul Whiteman, Vincent Lopez, Larry Clinton, Les Brown, and The Modernaires. He put together his own quartet in 1943; he sang and played accordion with accompaniment on guitar, bass, and clarinet. This group experienced considerable success in the United States in the last half of the 1940s.

This article uses material from the article Joe Mooney (musician) from the free encyclopedia Wikipedia and it is licensed under the GNU Free Documentation License.