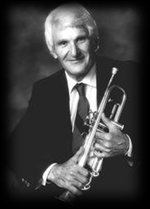 Secondo "Conte" Candoli (July 12, 1927 – December 14, 2001) was an American jazz trumpeter based on the West Coast. He played in the big bands of Woody Herman, Stan Kenton, Benny Goodman, and Dizzy Gillespie, and in Doc Severinsen's NBC Orchestra on The Tonight Show Starring Johnny Carson. He played with Gerry Mulligan, and on Frank Sinatra's TV specials. He also recorded with Supersax, a Charlie Parker tribute band that consisted of a saxophone quintet, the rhythm section, and either a trumpet or trombone.

Conte was the younger brother of trumpeter Pete Candoli. He was born in Mishawaka, Indiana, on July 12, 1927. During the summer of 1943, while at Mishawaka High School, Secondo "Conte" Candoli sat in with Woody Herman's First Herd.[1] After graduating in 1945, he joined the band full-time, where he sat side by side with his brother Pete in the trumpet section. Conte immediately went on the road, where he stayed for the next ten years, with Herman, Stan Kenton, Benny Goodman, and Dizzy Gillespie.

In 1954, after leaving Stan Kenton, Candoli formed his own group with sidemen Chubby Jackson, Frank Rosolino, and Lou Levy. He soon moved to Los Angeles to join the Lighthouse All-Stars with Shorty Rogers, Bud Shank, and Bob Cooper, and was with them for four years.

Candoli's long relationship with The Tonight Show began in 1967 and he became a permanent fixture in the orchestra's trumpet section when Johnny Carson moved the show to Burbank, California in 1972. For many years he preferred to stay in California where he could do The Tonight Show, take all the studio work he wanted, and do occasional concerts and clinics. He ventured to Kansas in 1986 as a WJF All-Star with Jerome Richardson, Barney Kessel and Monty Alexander at the 1986 Wichita Jazz Festival. After Carson's retirement in 1992, he traveled occasionally with Doc Severinsen, but still enjoyed his solo playing.

His playing brought him performing and recording opportunities with top names in show business, such as Gerry Mulligan, Shelly Manne, Terry Gibbs, Teddy Edwards, Bing Crosby, Sammy Davis Jr., and Sarah Vaughan. He has appeared in many motion pictures with various orchestras and worked in all of Frank Sinatra's TV specials.

Candoli was inducted into The International Jazz Hall of Fame in 1997. He died of prostate cancer at the age of 74, in Palm Desert, California.[2]

With Manny Albam and Ernie Wilkins

This article uses material from the article Conte Candoli from the free encyclopedia Wikipedia and it is licensed under the GNU Free Documentation License.