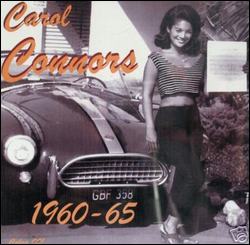 Carol Connors (born November 13, 1940) is an American singer-songwriter. She is perhaps best known as the lead vocalist on The Teddy Bears' single, "To Know Him Is To Love Him", which was written by her bandmate Phil Spector.

Connors was born Annette Kleinbard in New Brunswick. She is Jewish.[1] She was the lead singer of the pop vocal trio known as The Teddy Bears, which also included Phil Spector. The Teddy Bears' only major hit, "To Know Him Is To Love Him", which Spector wrote specifically to showcase Connors' singing voice, reached #1 on the Billboard Hot 100 in late 1958.[2] Immediately upon hearing the song, 23 year old Elvis Presley, who was then serving in the United States Army in Germany, requested his aides to contact her, eventually getting his wish to meet her personally when he returned to the US, in March 1960. A serious relationship between them followed, which lasted several years. After their initial hit, the trio disbanded because of the failure of their follow-up singles, and the fact that Spector preferred working behind the scenes to performing.

Some years later she legally changed her name to Carol Connors. She co-wrote (with Ayn Robbins and Bill Conti) "Gonna Fly Now", the theme song from the film Rocky, which earned her an Academy Award nomination. Carol Connors sang the theme to the film Orca, called "We Are One."

Other songwriting credits include the Rip Chords' 1964 hit "Hey Little Cobra", plus the 1980 Billy Preston/Syreeta Wright duet "With You I'm Born Again". In addition for "Madonna in the Mirror"; the 1994 title track "For All Mankind" on the debut album of Italian singer Guendalina Cariaggi, which was used as the theme song for a documentary produced by Pier Quinto and Lara Cariaggi, on the legends of soccer and the FIFA World Cup;[3] plus the finale song on A&E's 15 Films About Madonna;[4] and three songs - "Condi, Condi", "I Think of You so Fondly", and "Chill, Condi, Chill" - for Courting Condi (2008).

Connors also wrote and performed songs for several films. The 1967 beach-party film Catalina Caper features her song "Book of Love" (not to be confused with the Monotones' song), co-written with Roger Christian, which she performed backed by The Cascades. She co-composed three songs for the soundtrack of the 1977 Disney film, The Rescuers: "Tomorrow Is Another Day", "The Journey" and "Someone's Waiting for You". In 1983 Connors was nominated for a Golden Raspberry Award, for the 'Worst Original Song' for "It's Wrong for Me to Love You", from Butterfly, which she co-composed with Ennio Morricone.

A Golden Palm Star on the Palm Springs Walk of Stars was dedicated to her in 1999.[5]

This article uses material from the article Carol Connors (singer) from the free encyclopedia Wikipedia and it is licensed under the GNU Free Documentation License.