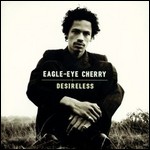 Eagle-Eye Lanoo Cherry[1] is a Swedish musician best known for his hit single "Save Tonight".

Cherry was born in Stockholm, Sweden,[2][1] the son of jazz artist Don Cherry and Swedish painter/textile artist Monika Cherry (née Karlsson). He is the fourth of five siblings. He is the half-brother of singer Neneh Cherry (his mother's daughter) and stepbrother to singer Titiyo.[3][4] Other half-brothers are violinist Jan Cherry, Christian Cherry, and jazz musician David Ornette Cherry. At the age of 12, Cherry was sent to school in New York City. He remained there to work as an actor and a drummer in various bands.[3]

In 1988, he was credited as "Teenager" in the film Arthur 2: On the Rocks.[5] In 1993 he starred on the short-lived NBC action/adventure television show South Beach.

His father died in 1995. Cherry returned to Stockholm to focus on his music rather than the acting career that had taken precedence in his professional life.[6] He began writing and recording his debut album, Desireless, in his bedroom studio on an acoustic guitar.[6] According to manager Tommy Manzi, Cherry's perfectionism made him keep the recordings under wraps until the album was virtually complete.[6] The album became a commercial success throughout the world during 1998 and 1999.[3] Desireless sold four million copies worldwide and was certified platinum in the United States.[3]

Cherry co-wrote and sang on "Wishing It Was" on Santana's 1999 album Supernatural,[3] as well as in films such as Wim Wenders' The Soul of a Man, Y tu mamá también, The Love of the Game, GO, Best Laid Plans, Holes, Billy Elliot and Over Her Dead Body. Some of his best known songs include "Save Tonight", "Falling in Love Again", "Are You Still Having Fun", "Long Way Around", "Feels So Right", "Skull Tattoo" and "Don't Give Up".

This article uses material from the article Eagle-Eye Cherry from the free encyclopedia Wikipedia and it is licensed under the GNU Free Documentation License.

Ennio Morricone Gabriel's Oboe aus dem Film Mission
Update Required To play the media you will need to either update your browser to a recent version or update your Flash plugin.