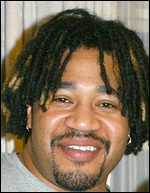 James Genus (January 20, 1966) is an American jazz bassist. He plays both electric bass guitar and upright bass and currently plays in the Saturday Night Live Band. Genus has performed as a session musician and sideman throughout his career, with an impressive list of artists with whom he has worked.

This article uses material from the article James Genus from the free encyclopedia Wikipedia and it is licensed under the GNU Free Documentation License.