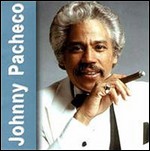 Johnny Pacheco (born 25 March 1935) is a Dominican musician, arranger, composer, producer, and bandleader of Cuban music (guaracha, son montuno, danzón, cha cha chá, guajira-son, pachanga).[1] He is one of the most influential figures in Latin music, best known for being the creator of the Fania All-Stars and Fania Records, and for coining the term "Salsa" to denote the genre.[2]

Pacheco is widely recognized as a salsa pioneer and innovator and is a 9-time Grammy nominee and was awarded the Latin Grammy Lifetime Achievement Award by The Latin Recording Academy in 2005.

Born in Santiago de los Caballeros, Dominican Republic, Pacheco inherited his passion for music from his father, Rafael Azarías Pacheco, who was the bandleader and clarinetist of the "Santa Cecilia Orchestra". In the late 1940s, when Pacheco was 11, his family moved to New York City. He continued polishing his musical skills, learning to play accordion, violin, flute, saxophone and clarinet.[3]

Playing the flute, saxophone, and various percussion instruments, Pacheco performed with Charlie Palmieri's (the brother of Eddie Palmieri's) Latin orchestra for a number of years before forming his own band in 1959.

In 1960, he organized his first orchestra, Pacheco y Su Charanga. The band signed with Alegre Records and within the first year of its release, his first album Johnny Pacheco y Su Charanga sold over 100,000 copies. Beginning then and through the end of 1963 Pacheco introduced a new dance craze called "Pachanga". He became an internationally renowned star and toured extensively throughout the United States, Europe, Asia, and Latin America. Moreover, "Pacheco y Su Charanga" was the first Latin band to headline the Apollo Theater in New York City in 1962 and 1963.[3]

Pacheco's career as a musician reached its peak in 1964, when he joined forces with Jerry Masucci to create Fania Records, of which Pacheco was the CEO, creative director, and musical producer. At Fania Records, Pacheco launched and solidified the careers of many artists who are now part of the history of the “Fania Family.” This was the record label that set the gold standard in Latin music and gained previously unimaginable international celebrity for many of its recording artists.[7]

In 1964, the label released his next endeavor entitled Cañonazo (Cannon Shot). The album featured Pete "El Conde" Rodriguez on vocals and a switch from the Charanga to the smaller-format Conjunto style. This was the first of many recordings with the "compadres" (literally, "godfathers"), and the beginning of a long friendship and working relationship between Pacheco and Rodriquez. Together, they recorded Los Compadres (1970), Perfecta Combinación (Perfect Combination) (1971), Tres de Café y Dos de Azúcar (Three Parts Coffee and Two Parts Sugar) (1973) and many other successful albums.

In 1967, he gathered many of the musicians from the Fania label and showcased them together in concert. This marked the birth of the legendary Fania All-Stars.

Also in 1966, Pacheco worked with the nasal-voiced singer Monguito "El Único" from the band Orquesta Broadway and vocalist Chivirico Dávila to record the seminal "Viva África" LP.[8] This album nods to Pacheco's increasing popularity at the time in West Africa. Pacheco would later make a pilgrimage to Africa partly based upon that notoriety and his Afro-Caribbean ancestry.

The early Fania All-Stars band was made up of Johnny Pacheco, musical director and flute; Larry Harlow on piano; Bobby Valentín (later replaced by Salvador "Sal" Cuevas) on bass guitar; Ray Barretto on conga (replaced later on by others, including Mongo Santamaría, Johnny "Dandy" Rodríguez and Eddie Montalvo); Roberto Roena on bongos; and Orestes Vilató on timbales (later replaced by Nicky Marrero due to a conflict with Ray Barretto, whose singer, Adalberto Santiago, formed La Típica 73 with Vilató, angering Barretto and forcing Pacheco to replace Vilató to prevent internal conflicts); Willie Colón, Barry Rodgers (subsequently replaced), and Renaldo Jorge (replaced by several others) on trombones; Larry Spencer (also to be replaced), Roberto Rodríguez (replaced by Víctor Paz, and subsequently by Juan "Juancito" Torres) and Héctor "Bomberito" Zarzuela on trumpets; and Yomo Toro on the cuatro (a small Puerto Rican guitar with 5 pairs of double strings).

Pacheco has also been an inspiration to the younger generations. For example, rap artist Mangu asked him to write arrangements, sing chorus, and play the flute in his album entitled Calle Luna y Calle Sol. Pacheco also produced music for feature films; he was the musical director of the film, Our Latin Thing, the first film about salsa and its influence on New York Latinos; he worked on a second film entitled Salsa released in 1974. In the 1980s, he wrote the musical scores and themes for the films Mondo New York and Something Wild. The latter was a collaboration with David Byrne, the lead singer of the group Talking Heads.[9] Several tracks that he arranged, produced, and/or performed were on the soundtrack of the 1992 Warner Brothers film, The Mambo Kings.[10]

Pacheco participated in the AIDS benefit concert "Concierto Por La Vida" in November 1988 at New York City's Avery Fisher Hall. He demonstrated his solidarity with the victims of Hurricane Georges (Zhorzh) by collaborating with the Hispanic Federation Relief Fund during "Hurricane Georges Relief Fund 1998". This event was transmitted live across the northeastern United States by the NBC television network. He also participated at an event at Hostos Community College for the same purpose.

Pacheco's contributions to Latin Music have been recognized throughout his illustrious career. The following are among the awards that have been bestowed upon him:

In 1996, the then President of the Dominican Republic, Joaquín Balaguer, bestowed him with the prestigious Presidential Medal of Honor. A year later, Pacheco was the recipient of the Bobby Capó Lifetime Achievement Award, awarded by New York Governor George Pataki. In addition, Pacheco was presented with the First International Dominican Artist Award from the distinguished Casandra Awards. In June 1996, Johnny Pacheco was the first Latin music producer to receive the National Academy of Recording Arts & Sciences, (NARAS) Governor's Award in New York City.[11]

In 1998, Pacheco was inducted to [International Latin Music Hall of Fame] (ILMHF) during the first Induction and Award of the ILMHF. The ILMHF awarded him The Lifetime Achievement Award, in 2002.[12]

In 2004, Pacheco was awarded the American Society of Composers, Authors and Publishers, ASCAP Silver Pen Award.[13]

On June 5, 2005, Pacheco was honored by Union City, New Jersey with a star on the Walk of Fame at Union City's Celia Cruz Park.[14]

On March 24, 2009, Pacheco was awarded "El Soberano", the highest distinction given by the Association of Art Columnists of the Dominican Republic.

In 2007, Pacheco was portrayed in the movie El Cantante starring Marc Anthony and Jennifer Lopez.

This article uses material from the article Johnny Pacheco from the free encyclopedia Wikipedia and it is licensed under the GNU Free Documentation License.